Professors of crime scene investigation – forensic anthropology – and the study of insects – entomology – join forces each year for a major field project at the University of West Georgia.

We’ll warn you: this collaboration is not for the squeamish.

The principle behind the partnership of biology and anthropology departments is simple. Professors orchestrate a mock crime scene for their students to investigate. The purported crime is homicide.

To set the scene, Dr. Gregory Payne, associate dean of the College of Science and Mathematics, acquires the remains of several deceased pigs. These cadavers are left exposed to the elements in a secluded, outdoor location.

Over the course of weeks, graduate and undergraduate students in his entomology course examine the insects and larvae that coalesce to consume the animals’ remains.

“The object for students is to tabulate insect succession on decaying bodies,” Payne said. That is, the types, stages and numbers of insects observed as time passes.

Students visit the scene every day for the first week and every second or third day over the ensuing weeks. They carefully tabulate which insects, such as flies and carrion beetles as well as larvae such as maggots, arrive and in how great of numbers after time of death.

Thus, students learn the succession of insects over time. Armed with this understanding of an actual crime scene, entomologists can help determine a time of death when it is not otherwise known.

“I have two major projects in the course,” Payne said. “One is for students to create a collection of insects they identify. The other is the entomology of a crime scene project, created to help students earn their undergraduate certificate in forensic sciences.” 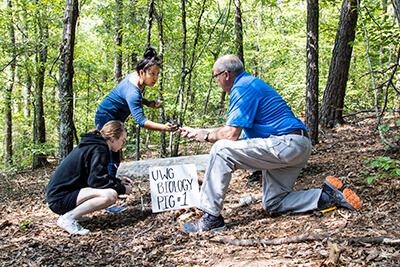 That certificate, offered by the anthropology department in the College of Social Sciences, is where Dr. Corey Maggiano comes in.

Students excavate the bodies and carefully record the conditions of the grave, the bodies’ orientation, and state of preservation, applying multiple search and survey techniques including mapping of the site and logging evidence.

Once exhumed, the bodies are brought back to the Biological and Forensic Anthropology Laboratory (BAFAL), an analytical lab on campus. They are processed, photographed, and analyzed along with any other evidence found at the scene, and the skeleton is examined for signs of trauma indicating cause of death.

“With careful examination, the ‘actual story’ created by the evidence and trauma is revealed,” Maggiano added.

Experiential, hands-on learning as well as cross-disciplinary collaboration is important to careers in both anthropology and biology. No one knows this better than senior anthropology major Alyssa Phillips.

“I was very apprehensive about the project at first,” said Phillips, who is currently seeking her forensics certificate. “I knew this would be great exposure for my career. It was fascinating to see how the heat and amount of insects present sped up the rate of decay. These observations are helpful when applied to the study with human bodies and crime scenes.” 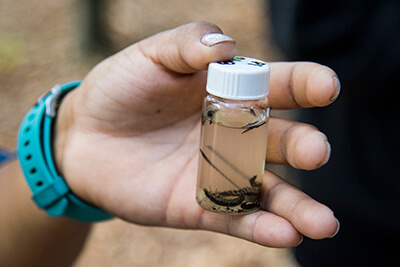 Perhaps what the experience of cross-functional, experiential learning teaches most is acuity of observation. By moving students outside to immerse them in natural surroundings, they have a much more data rich environment than what can be found in any classroom. They need to follow protocols, but they need to pay attention to their senses as well.

“Becoming more observant is a critical role of the course,” Payne said. “If the students become more aware of the environment around them, the course is successful.”