The University of West Georgia senior, who plays center back (a defensive position) on the Wolves soccer team, has played soccer for almost the past two decades. At the end of this season, though, she’ll step off the pitch for the last time as a student-athlete. 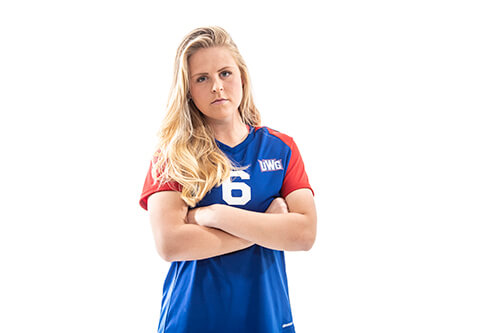 “When I was growing up, my two big things were soccer and gymnastics, but there came a time in my life when I couldn’t do both,” Haase said. “I had to choose, and I was too tall to really succeed as a gymnast, so soccer is the one that stuck.”

“I love the connections I’ve made with people who I met when I was 8 years old in soccer and who I still talk to today,” she said. “But I really love to win. As a defender, I like having a clean sheet, meaning the opponent didn’t score on us. I love being able to contribute to our team in that way – denying other teams from getting points on us.”

The Knoxville native moved to Newnan, Georgia, in 2009 when her father, David Haase, was offered a position in UWG’s Department of Athletics. He currently serves as assistant athletic director of student-athlete development and academic support.

Haase traveled to another university in Georgia for her freshman year, thinking she wanted to make a fresh start after high school. However, she soon made her way back to West Georgia for her sophomore year, where she’s seen time on the soccer field for the past three years.

Last year, as a junior, Haase played in five games, making four starts. She assisted three goals in just five games and had a two-assist performance in a 4-1 road win over Gulf South Conference foe Auburn University at Montgomery.

“During my time here at UWG, I’ve become more outspoken and more of a leader,” she said. “I’ve learned to stay positive through everything – all of the ups and downs in life, both on and off the soccer field. It’s really starting to hit me, too, that I only have one year left of this. I don’t want to have anything left on the table. I want to go out big with a state title.”

After graduating with her degree in sport management with a minor in marketing next May, Haase would like to stay in the sports industry, but not in the way she’s known for two decades.

“I’ve always wanted to work in sports, but not necessarily as a coach or player,” she said. “I’d love to work on the marketing side of a sports time, figuring out new ways to promote teams and their games.”

Haase described her emotions as she nears the end of her soccer journey in bittersweet terms.

“It’s sad – but also exciting – to start a new chapter of my life now,” she said. “I plan on playing in adult leagues, but it’s crazy to think about leaving a big part of my life behind at the end of this year. I’m just excited to see what this last season has in store for me – hopefully, a title.”