UWG | Closing the Books on 2018-19: UWG to Celebrate Spring Commencement

The University of West Georgia will close out the 2018-19 academic year with its spring commencement on Thursday, May 9. 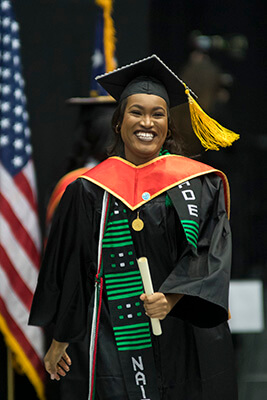 Founded in 1950, Southwire currently produces the wire used in nearly half of new homes built in the United States, and half the cable used to transmit and distribute electricity throughout the nation. As a world leader in the manufacturing of wire and cable, the company posts more than $5 billion in revenue and employs 6,000 people.

Richards began serving on corporate and nonprofit boards in his early 20s and assumed the presidency of his family’s manufacturing company at age 28.

With his professional experience in general management of companies big and small, and board leadership, he enjoys the challenges and opportunities that come with making all kinds of organizations successful.

"I have a growing interest in early-stage companies and believe they have much to teach mature companies,” Richards said. “So I invest in and teach about them. I teach business students about the governance of family, early-stage and mature companies because I want to show them how to deal with the challenges they will later face as leaders.”

Richards’ enjoys fishing and teaching, and lives with his family in Charlotte, North Carolina.