Madi Fleming spent her childhood summers in a gymnasium, watching her mother – a volleyball coach at a high school in Columbus, Georgia – host open tryouts and practices. 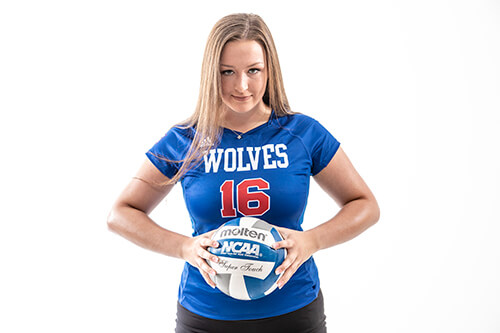 So it came as no surprise that Fleming chose volleyball as her preferred extracurricular activity once she got older. Her mother, Donna, was charged with launching the volleyball program at Columbus High, Fleming’s alma mater.

Now, 16 years after she first started volleying a ball over the net, she’s in the middle of her last season as a student-athlete at the University of West Georgia.

“I’m definitely going to miss playing this sport I love at such a high level,” said Fleming, who chose UWG after her first recruitment visit to campus. “I’m going to miss the team dynamic and how I’ve gotten the chance to know so many different people over the years here. We will always have that special bond, and I’ll always love playing volleyball, but it’s never going to be the same.”

When Fleming graduates later this academic year with a degree in business management, she hopes to land a job and continue her schooling with the pursuit of an MBA degree.

“I would love to have a career in the corporate world where I can start out at an entry-level position and climb the ladder through the years until I’m in a leadership role,” Fleming said. “My dad started off as a bank teller and built his way up to where he is now. Seeing how he’s progressed through promotions has been really inspiring for me.”

As a setter on the team, Fleming is responsible for deciding which of her teammates is best-positioned to score and, thus, who she should set up to deliver a scoring shot.

“I have to be very accustomed to seeing what the next play should be and deciding who should get the ball,” she said. “That means I have to know everyone really well because I have to translate what our coach wants to happen in a play to what can actually happen on the court. And I have to do that on the fly.”

That requires a good amount of chemistry and team building both on and off the court, Fleming said.

“It’s a big responsibility, and I’ve had to step up my maturity level over the years so that I can be in a position where I’m nurturing the younger people on our team to get them on the same page as everyone else on what our plan of attack will be,” Fleming said. “Because at the end of the day, volleyball is a team sport, and we have to be comfortable and confident in how we know we can perform.”

She’s performing well. For her junior season last year, Fleming played in 91 sets, totaling 37 kills (successful, legal, point-scoring plays) out of 139 total attacks, or attempts. On the defensive side, the setter totaled 182 digs (defensive contacts resulting in a playable ball) and 22 blocks, or deflections of the ball.

One of Fleming’s teammates, fellow senior and outside hitter McKenna Wharton, has become a particularly good friend. The rest of the team call Fleming and Wharton “double trouble,” Fleming said.

“It’s been so great to share these four years and build memories with such a great friend who will be in my life forever,” Fleming said. “The pace is crazy in college volleyball – even more intense than high school. That really emphasizes the need for the team dynamic to be strong as early as possible. It really comes down to which team can be more mature and click together faster. That’s been the difference-maker in a lot of matches.”