If she can help it, McKenna Wharton’s not going to have a desk job. Her feet are too accustomed to constantly moving to allow that. 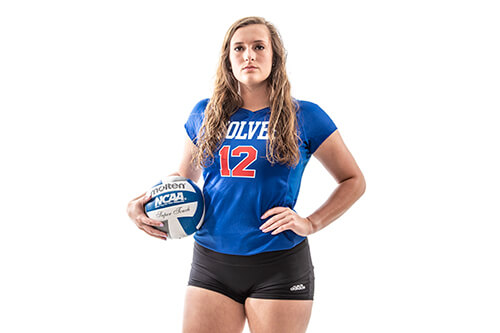 Wharton, an outside hitter on the University of West Georgia volleyball team, plans to apply to nursing schools after she graduates from UWG in May 2020 with a bachelor’s degree in health and community wellness.

The 21-year-old Memphis native knew she wanted to attend UWG as soon as she stepped on campus.

“I love Georgia and the life I’ve created down here,” Wharton said. “The campus has been so welcoming, and with my degree, I can really go anywhere I want. I’d love to go the emergency and trauma route of nursing – that would definitely keep me active.”

Wharton has played volleyball since she was 10 years old. It’s always been “her thing.”

“I started playing in club volleyball teams, and I just fell in love with the competitiveness of it,” she said. “Scoring on another team gives me such a great rush, and I’ve made some lifelong friends on and off the court.”

Wharton’s record speaks for itself: last year, as a junior, she totaled 261 kills (a successful, legal, point-scoring play), 783 total attacks (an offensive attempt to score a point), and a .157 hitting percentage (the number of kills minus the number of errors, divided by the number of attacks).

“I know my strengths – I know have a good arm, but I can’t jump the highest,” Wharton said. “That’s what I love about volleyball – you know what your teammates’ strengths and weaknesses are and can help them how they need you to. You have to trust them to know they will set you up to succeed.”

A strong arm and a good vertical jump are important for volleyball players, but Wharton said mental toughness is huge, too.

“You can’t get stuck in the last play – volleyball is too fast of a game to do that,” she said. “So being able to put a not-so-great play behind you and get out there to make a better play is huge. Once you build that momentum, though, everything follows from there.”

Now that she’s coming to the end of her volleyball journey – one that’s lasted more than a decade – Wharton would like to leave a legacy of leadership behind her at UWG.

“Volleyball players are raised to be very competitive people who lead independent lifestyles and don’t need anyone’s help,” she said. “There’s something to be said for that, but I would like to become a leader for the underclassmen and provide them a sense of support and guidance. We’re not here to play games; we’re here to win championships, and that’s what we want to do.”