As a child, Chanell Pajaro Lowery didn’t like school. She certainly did not plan on going to college, a decision she later realized held her back from great opportunities. 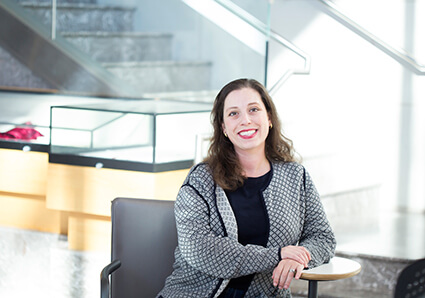 Today, a married mother of two, Lowery has made her mark as a graduate student of history at the University of West Georgia. She conducts progressive research in public history as she prepares for a bold new career.

None of her success was handed to her. She earned it, and finding the right fit at UWG provided an opportunity to stand apart from the crowd.

Lowery’s own history plays a role in her interests and in her success. Her father’s parents emigrated from Cuba when Fidel Castro took control of the government. Her mother’s family consisted of sharecroppers and textile manufacturing laborers.

Lowery grew up with a strong work ethic. But, like many children, she held a scant interest in academics. At 16 and with child, she dropped out of school. Although blessed by family, she found her opportunities limited.

“In my mid-20s, I discovered why I struggled to make anything more than minimum wage,” Lowery said.

She worked in daycare and, before that, in restaurants as her parents had. She realized that only by returning to school could she explore her potential and increase her income.

After obtaining her GED, Lowery signed up for radiology classes at West Georgia Technical College. There was just one problem.

“I failed to remember that I’m horrible at science and math,” she laughed.

Still, she learned from the experience. Lowery found herself very much engaged in classes such as sociology and political science.

Following her dreams, Lowery transferred her credits to UWG. While guided by passions, she also remained practical and career-oriented. Out of the myriad of subjects that interested her, she chose history as a major because it provided many avenues for graduate school, including education, law school and public history.

Taking full advantage of her undergraduate years, Lowery joined the History Club, of which she is now vice president, and chose marketing as a minor to learn methods for reaching wider audiences. She especially wanted to share the lessons of history with the underserved.

Then, in 2015, Dr. Ann McCleary, professor and director of the Center for Public History, hired Lowery as a work-study student in the UWG Center for Public History at the Ingram Library. This is where her interest in public history at a professional level blossomed. She assisted with research on the West Georgia Textile Heritage Trail, which includes historic sites related to the region’s once flourishing textile industry. The center’s research culminated in a book on the topic published by Arcadia Publishing.

Recalling her commencement is an emotional experience for Lowery.

“As I walked, my husband, children and my professors cheered me on,” she said. “Going back to school as a mother and wife hasn’t been easy, but, as the saying goes, it takes a village.”

Lowery found that village in the students, faculty and staff of West Georgia.

“Professors treated me like a person and not a 917 number,” she said.

She highlights many who helped her along the way: Dr. Keith Pacholl, who assisted in letting Lowery’s children attend class with her when school let out early, and Dr. Carrie Pitzulo, who provided encouragement when Lowery’s father died.

“The staff at UWG facilitates a relationship of success,” she said.

As a graduate student, these successes expanded into even greater opportunities. Lowery attended the North American Labor History Conference, where she served on a panel and heard academicians discuss her work. She continues work on the heritage trail as a research assistant, managing database, website and research duties while preparing her thesis, “African-American Work Desegregation of the Rural Southern Apparel Industry.”

With graduation approaching, Lowery looks to the future. She is interested in working at a museum in an education or outreach capacity to expand public awareness.

“Museums and related programs can really bring people together by creating empathy and understanding of each other’s stories,” she said. “The things that I’ve learned here, and the skills that I’ve obtained by being here, really make me marketable across several types of fields.”

Marketing, management, communications, grant and project proposal writing are just a few of the career avenues Lowery may explore with the degrees and experiences she has built with UWG and the village of friends and connections she has made.