Krystallyn Keith just wants to save the world.

A former U.S. Marine and recent University of West Georgia graduate with degrees in anthropology and Spanish, Keith knows she can’t do that on her own, but that doesn’t stop her from trying. 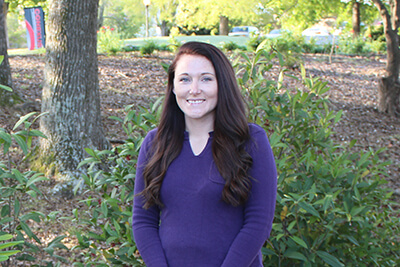 “I want to do my part and make sure I leave my footprint on the world,” said Keith, who served five years in the military, including a seven-month deployment in Afghanistan.

Keith, a UWG Honors College graduate, served as a cryptologic linguist in the Marines, translating between English and Pashto, one of the two official languages of Afghanistan. Keith said she used her flair for translation to serve a humanitarian purpose while enlisted.

“Being able to advocate on the behalf of other people by becoming a communication and cultural bridge was an amazing experience,” Keith said. “I was able to do my part to dispel those thoughts of ethnocentrism by using my talent for languages, and that’s what I want to continue doing now that I have my degrees.”

Traveling to Afghanistan wasn’t the last time Keith went outside the nation’s borders, though. Thanks to a Gilman Scholarship she received as a UWG student, she also traveled to Costa Rica, where she experienced another country’s culture in a novel way.

“When I was in the military, I knew a lot about the Afghani culture, but I had a certain perspective because of how I was trained,” Keith said. “In Costa Rica, I was coming from an academic standpoint and actually living with a family of three Costa Ricans who taught me so much – not just about how to speak Spanish or the culture, but how to live a more tranquil, less stressful life.”

Keith has applied that worry-free lifestyle to her life since returning from Costa Rica – even in her classes.

“As a UWG Honors College student, it’s definitely been challenging because of the more rigorous classes,” Keith said. “The volunteerism aspect of the Honors College has also been eye-opening for me, a lot like studying abroad. These experiences have made me a more well-rounded student and individual.”

Keith graduated from Central High School in Carrollton, Georgia, in 2009, enlisting in the Marines shortly after. She began her journey at UWG in 2014, when she was expecting her son.

“I enrolled as a non-traditional student and as a veteran who had a very different perspective from the students who had just graduated high school,” Keith said. “At the same time, we were able to establish connections and find value in sharing our experiences with each other. I learned a lot from them.”

What’s next for Keith? More school.

She hopes to earn her master’s degree in either anthropology or public health – or both. But no matter where life takes her, Keith’s goal to change people’s lives remains steadfast.

“When it came time to pick a major at UWG, I didn’t know exactly what I wanted to do,” Keith said. “But, my gut instinct and the magnetic pull toward language and culture happened again. That’s where I need to be. It makes me happy, and it gives me a purpose: to empower people with everything I’ve learned both in my life experiences in the military and in the classroom at UWG.”