Growing up, current commanding general of all Marine installations in the eastern U.S. and University of West Georgia alumnus Brigadier General Julian Dale Alford ‘87 said he saw himself an average teenager. 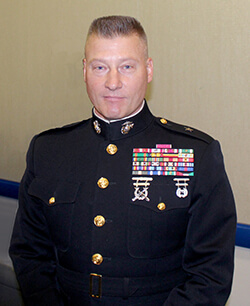 Raised in Riverdale, Ga. in a lower-middle class family with a father who worked as a mechanic for Delta Airlines, Alford played varsity football and wrestled his final two years of high school. He wasn’t the star of the team, the captain or voted most likely to succeed. He took the bare minimum classes to graduate. After high school, he didn’t pursue college right away and got a job framing houses.

Eventually, he went on a visit to UWG. In that instant he decided that it was in his future. He wanted to be more than average.

After his first couple of years in school passed, he decided to join the Chi Phi fraternity. In 1985 he enlisted in the United States Marine Corps Reserve.

“Those two decisions are the reason I’m standing here speaking in front of you today,” Alford told a crowd of Chi Phi brothers, Marines soon heading to basic training, veterans and others during a recent visit to UWG.

As he looked back over the 30 years he has been in the Corps, he wanted to give back and speak about what he has learned from being a Marine and a Chi Phi brother.

Originally, he signed up for three years of service, but Alford found his passion that has made him the leader he is. With all of his military successes and accomplishments—including rifle platoon commander in the Republic of Panama, platoon commander in Desert Shield and Desert Storm, faculty advisor and more—he holds his UWG alumnus status close to his heart. 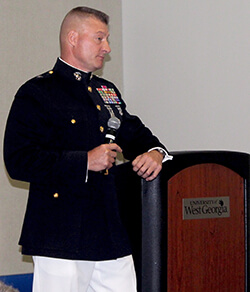 “It’s about passion,” stated Alford. That’s what gets you ahead. You have to find your passion, work really hard and most importantly be a good person. That is what the Corps, Chi Phi and West Georgia taught me.”

First and foremost, he advised, a leader needs to state his or her vision often, with passion, and reinforce that vision with action.

“If you believe in your vision, your people will believe,” Alford explained. “The art of leadership is getting a group of people to move in the same direction, see the same vision and do what is best for the organization, not for themselves.”

A leader must choose and understand their circle of trust, and Alford believes that the circle should be as large as you can make it. Within this circle, there should be open discussion and debate. A leader should not be discouraged by disagreement, and should embrace judgment. Everyone in the organization should know that the leader will make the difficult decisions when the time arises.

Each time Alford takes command, he revisits his view on leadership. He analyzes them and thinks to himself, how is he going to accomplish this? Was he a successful leader in the last unit he commanded? If leaders are honest with themselves, he said, they will recognize their flaws and be receptive to change. 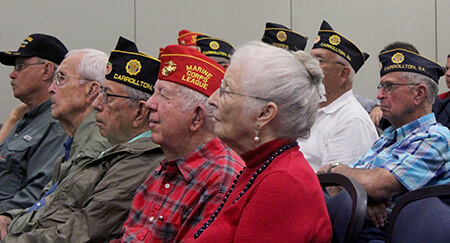 What is leadership, and what does it take to be a good leader? Alford laid out his nine “rules” that express how to excel in a leadership role.