In the early days of the pandemic – when it became apparent that Coronavirus Disease 2019 (COVID-19) was going to be a large-scale global public health issue – the Centers for Disease Control and Prevention’s (CDC) David J. Sencer Museum began to collect items so they wouldn’t be lost to future researchers.

A critical member of this documentation team is University of West Georgia alumna Heather Rodriguez ’17 ’19, who is a contractor with Chickasaw Nation Industries serving as assistant curator of the CDC’s David J. Sencer Museum. Along with museum Director Judy Gantt, Head Curator Louise Shaw and Collections Manager (contractor) Mary Hilpertshauser, the group is in charge of rapid response collecting – the practice of accumulating present-day objects and documentation for future interpretation.

“So much of it is ephemeral,” Rodriguez said of the evanescent nature of the project. “The primary goal is to document the CDC response to the pandemic in communities around the world. The museum is interested in seeing how CDC has responded to this global public health crisis on the community level by collecting items from teams deployed around the world and from the communities in which they work.”

One such team is stationed in the Navajo Nation, an Native American territory spanning Arizona, Utah and New Mexico.

“The Navajo Nation has the highest number of cases of COVID-19 per capita than any other area in the U.S.,” Rodriguez explained. “CDC responders are working with the Navajo Nation Tribal Epidemiology team, and from them, we have collected photographs, newspaper articles, and other documentation regarding the response there.”

Other artifacts – such as the evolution of the CDC-developed real-time diagnostic kits, narratives documenting the institute’s serological studies, and digital material chronicling the Advanced Molecular Detection program’s work leading a consortium of public health labs focused on issues surrounding large scale and rapid genomic sequencing of COVID-19 – are just a few important pieces that “encapsulate the broad scope of CDC’s scientific work undertaken by CDC during the pandemic,” Rodriguez said. 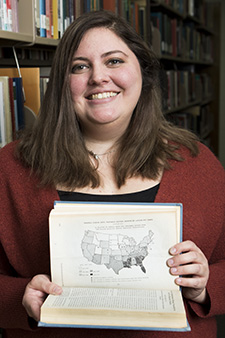 This isn’t Rodriguez’s first time helping the agency document a pandemic. Rodriguez credits UWG for giving her career a start at the organization during such a critical time in the world’s history.

“UWG was really my starting point,” she said. “Professors like Dr. Steve Goodson, Dr. Ann McCleary and Dr. Stephanie Chalifoux allowed me to have the kind of academic freedom I really wanted while providing skills and structure. Thanks to West Georgia, I got my dream job before I even left college.”

“Louise was trying to piece together the CDC’s role in influenza prevention and the history of it dating back to 1956 when it was established as a World Health Organization Collaborating Center,” Rodriguez explained. “I began reading and researching as much as I could and piecing together photographs and materials for this exhibit.”

Rodriguez’s work became more focused when she began homing in on the 1918 flu pandemic, which infected 500 million people – about a third of the world's population at the time. That exhibit never had the chance to open before the world was rocked by another pandemic, COVID-19, and is currently on hold.

And although more than a century separates them, Rodriguez understands how people can draw conclusions between the two international health crises.

“One of the things that’s very familiar to people when they look back and they see photographs and hear narratives of the 1918 pandemic is looking at social distancing,” she observed. “The American Public Health Association referred to it back then as ‘breaking the chains of infection’ – they encouraged bans on public gatherings, enforced stricter sanitation in bars and restaurants, and shut off public drinking fountains.”

But 100 years can make a big difference as well.

“Public health is a lot stronger than it was in 1918,” Rodriguez said. “We’ve had decades of pandemic preparedness.”

Thanks to Rodriguez and the rest of the David J. Sencer CDC Museum team, tomorrow’s historians will have a wealth of information in their hands – from telework and homeschool schedules to photographs of microbiologists sewing cloth masks for their colleagues working in labs.

“To capture these stories and the work of CDC as it happens is so important,” she concluded. “I’m not sure if after the pandemic we would have been able to capture such a story once people resettle into the new normal. We want to present this material to future researchers so they have a better idea of the entire image of CDC during the COVID-19 pandemic.”