Sometimes it only takes one – one professor, that is. University of West Georgia alumna Danielle Fluck met that one professor who sparked an interest in her that guided her career to Georgia’s Capitol. 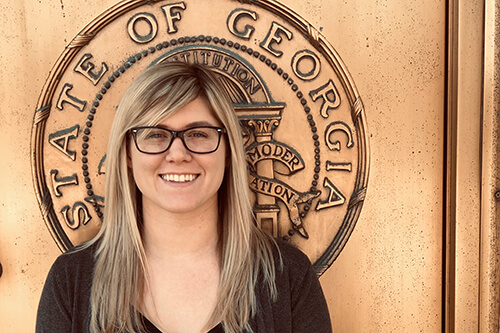 Danielle Fluck ’15 ’17 works at the Georgia Governor’s Office of Planning and Budget, where she works to develop, implement and ensure compliance with annual state budgets totaling approximately $626 million for state agencies, commissions and authorities.

In this position, Fluck provides executive staff and the governor with analysis on the financial impact of proposed legislation of physical and economic development, such as the rural broadband expansion legislation passed during the 2018 legislative session.

Fluck graduated from UWG’s College of Social Sciences with a bachelor’s degree in political science and a master’s degree in public administration.

“I always planned on a career that was based in political science, but I had every intention of applying for law school until my last semester of undergrad at UWG,” Fluck said. “Then, I realized that my real passion was in the policymaking aspects of political science and public administration.”

Through the educational guidance of UWG, Fluck was able to find a career that met her passions in the political science field.

“Dr. Anthony Fleming, professor of political science, went above and beyond to influence my education and encourage me,” Fluck explained. “His courses on policy analysis gave me skills that I use in my work on a daily basis.”

Fleming’s influence and support extended even beyond Fluck’s graduation.

“He also helped me prepare during the interview process for my current position and is always available if I need a little guidance,” Fluck concluded.