Ethan Stiles knows the role that staying involved can have on your career success. 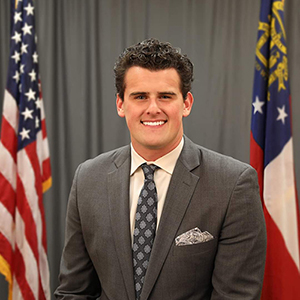 “I actually didn’t get involved at West Georgia until I was a junior in college,” said Stiles, a 2017 University of West Georgia alumnus and recent Thriving Under 30 recipient. “I was given a gamut of opportunities. I became involved with student government and the Blue Coats. Then university administration hired me to do external relations for the school. So as a student, I was still very much involved with government as a whole and the efforts of UWG.”

The UWG Alumni Association’s Thriving Under 30 program acknowledges alumni who are under the age of 30 and have made a significant impact in their chosen career fields. The program also recognizes the honorees for their dedication and representation of the university.

Stiles, a biology major from Bremen, has had a tremendous career in government. During his time at UWG, Stiles served as president for the Blue Coats and student government. The Blue Coats are a group of student representatives who work toward the advancement of UWG and its students. Stiles was also involved with the Governor’s Internship Program and the Senate Aide Program.

He explained that the Governor’s Internship program gave him the opportunity to develop relationships and expand his political experience.

“I developed a daily brief of everything that happened in the Senate chamber and I was assigned to go to certain committee meetings that related to policy that Governor Nathan Deal was trying to push,” Stiles explained. “It was a great experience, and I got to see how the initiatives of the governor's office were executed. I also developed fantastic relationships with a series of senators and house members.”

After graduating from UWG, Stiles began working for the Georgia General Assembly as a legislative staff member. After working for the Georgia General Assembly, Stiles made a career change to the University System of Georgia where he became the project manager and oversaw the implementation of the Comprehensive Administrative Review, a large project that focused on savings.

Stiles returned to the Georgia General Assembly once the Comprehensive Administrative Review project was complete. He then became the chief of staff to Georgia Senate Majority Leader and UWG alum Michael Dugan, who he continues to serve.

Stiles is the youngest chief of staff to a member of Senate leadership the state of Georgia has ever appointed.

Stiles touched on the challenges that he faces in his current role and how it inspires him to work hard.

“At the end of the day, we have a responsibility to 11 million people, and it’s daunting,” Stiles said. “Managing more than 70 people to work for the betterment of every Georgian is hard, but I love it.”

Stiles also expressed the honor he felt to share the title of Thriving Under 30 with other alumni.

“It was an absolute honor to be involved with them,” Stiles said. “I was deeply impressed with every single one of them – whether it was making a difference for K-12 students, being involved with huge gaming industries, or being on the forefront of breaking science.”

“The second I got involved at UWG, I began to love the institution,” Stiles explained. “ I loved what it represented. It was my fate that I ended up there. It ended up working out beautifully for me.”