Adam Tucker knows how to be successful in his chosen career: keep moving forward. 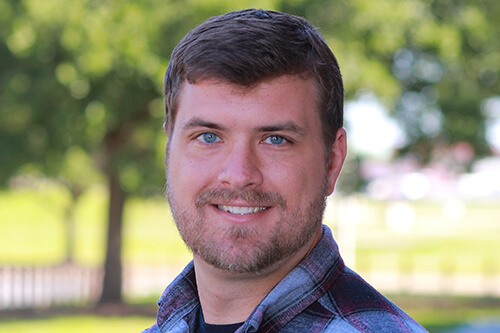 “You have to be willing to take the hits and move on, no matter how long it takes to get to the end of the tunnel,” said Tucker, a 2015 University of West Georgia alumnus and recent Thriving Under 30 recipient.

The UWG Alumni Association’s Thriving Under 30 program recognizes alumni who are under the age of 30 who have made a tremendous impact in their career field. The program also recognizes the honorees for their representation and continued dedication to the university.

“I started out working as an announcer and producer for The WOLF Internet Radio, where I covered a variety of sporting events on campus,” Tucker said. “It was exciting to be behind the microphone calling each game and managing the mixer board for the broadcasts at the same time.”

In his last year at UWG, Tucker began an internship with 92.5 FM “The Bear,” where he covered different sporting events around Senoia, Georgia.

Continuing to work in various broadcasting outlets after graduation, Tucker worked as a TV and radio producer for Lake Broadcasting Inc. He also worked as a radio board operator for numerous sporting events, including football and basketball broadcasts at Auburn University.

“I thought my career there was set and I would be promoted to something full time in a matter of time,” Tucker explained. “But, sadly, the company shut down the network I worked for and I found myself back to the beginning.”

Determined to stay in this career path, Tucker decided to start his own video production company, founding Phoenix Creek Studios, where he created commercials and various types of video content.

“While the company struggled to take off, the videos I created managed to get attention at the U.S. Army base in Fort Benning,” Tucker continued. “They contacted me and requested to see my work, so I sent them my demo reel and other videos I created through my business. Sometime after that, I was interviewed for the position they had available.”

Tucker was offered a job as an associate producer for Fort Benning Television shortly after his interview.

“Needless to say, it was one of the most exciting days of my life,” Tucker expressed. “Now, I work as a video journalist covering a variety of events taking place in and around the installation and create video news packages to be shown on the social media pages for the army at Fort Benning.”

Tucker credits UWG for guiding him and helping him develop the passion he has for his career.

“During my first few years of college, most of my time was spent trying to figure out what I wanted to do in life,” he said. “When UWG accepted me, it helped guide me to an area that is filled with numerous opportunities that I grew fascinated with in a short amount of time. I knew right then and there that I wanted to be successful in this field – and I was willing to accept the challenges and gain the awards that follow.”

Tucker continues to represent UWG and dedicates his time to the university. In 2016, he returned to UWG to speak to students attending Media Day.

“The bright side about this field is that you can do a variety of things involving radio, TV, film and other forms of media instead of just focusing on one of those options,” Tucker concluded. “Learning as many aspects as possible in this field will expand your horizons and can make you invaluable wherever that path leads you next.”