It’s a dream that two University of West Georgia alumni are turning into a reality as they aim to become financially independent by the time they’re in their mid-30s. 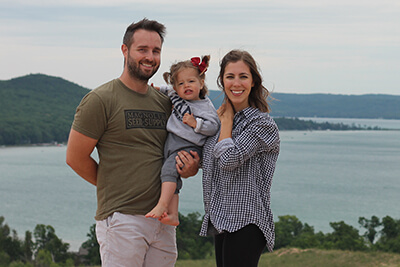 Bradley and Ashley Rice, both of whom graduated from UWG in 2011 with degrees in economics and speech language pathology, respectively, are proponents of a movement called “Financial Independence, Retire Early” – or FIRE, for short – that encourages individuals to find ways to live their lives without being tied to a 40-hour workweek.

“When I was at UWG, my plan was to become a high school economics teacher and settle down, put in a few decades of work and retire,” Bradley said. “UWG really opened my eyes to the idea that there are other ways to lead your life and that you don’t have to settle for a job you may not want to do for 30 or more years. The professors I had encouraged me to be more creative and to learn lots of things and then get out of college and figure out what I wanted to do with that knowledge.”

After several years in a computer programming position for a health care software company, Rice started his own information technology-consulting firm, which he now operates part-time.

“I’m able to work Monday through Friday from 8 a.m. until 12 p.m., and Ashley gets to be a stay-at-home mom and raise our daughter,” the 29-year-old said. “That gives us an extreme amount of flexibility to do whatever we want.”

And now, the Rices are taking their lives – and their 20-month-old daughter – on the road for a nationwide road trip, starting in Florida and making stops in Michigan, Washington, California and Utah.

Savings didn’t go out the window when the couple – who met in a class at UWG – decided to transition to the FIRE lifestyle, either. Bradley said they still manage to save 40 percent of their income and put it toward their retirement. He hopes to retire in seven years, at age 36.

“Of course, I could keep working past that age if I want, but the concept is I’m doing what I want to do, so it never really feels like work,” Bradley said. “We’re able to keep our expenses so low by finding tricks and only spending money where it brings the most happiness for us.”

The couple also offsets their expenses with alternate means of income, like renting their Florida home for the next year as they go on their road trip.

“I was able to learn the skills and principles that feed into this lifestyle while I was at UWG, and I’ve been able to develop a formula for how to live on what we make,” Bradley said. “We’ve been able to nail down exactly what we spend and how much money we need in our retirement accounts before we retire, and from that we can determine what we need to cut out or if we’ll need to work a little longer than expected before we can retire. When you apply those principles, it creates a ton of flexibility in your life.”

Ashley recalls one occasion while the couple was still enrolled as undergraduate students when they were deciding what to eat for dinner.

“We were going to go to Chick-fil-A, but we decided it was too expensive to eat out, so we chose to go back to my apartment and cook dinner,” Ashley said. “We’ve both been frugal from the start, so coming up with flexible and different ways to not do the norm comes naturally to us.”

Ashley, who worked as a contract speech therapist after graduating with her master’s degree, said she never expected to be a stay-at-home mother.

“Back in college when we were planning out our lives, it looked like I was going to be the breadwinner for the family,” Ashley said. “I was going to start a private practice, and Brad was going to be a high school teacher. However, over the last couple of years, seeing how much money Brad was making by working part-time and how much money we were saving by adopting these tricks and techniques to our lives, it was a no-brainer to become a stay-at-home mom when our daughter was born a year-and-a-half ago.” 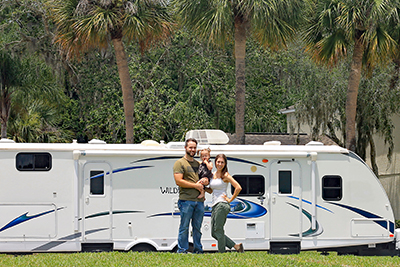 The Rices know they’re lucky to be able to live this sort of flexible lifestyle, but it didn’t happen overnight.

Where most people see nothing but obstacles stopping them from quitting their jobs, buying an RV and hitting the road, the Rices see opportunities.

“We take the overall mindset that says instead of finding an excuse, dwelling on it and letting it stop you, you find a solution to that problem and deal with it,” Bradley said. “We’ve never been the type of people who think of an excuse why we can’t do something.”