The late American television personality Fred Rogers said his mother always told him to “look for the helpers” during challenging times. When University of West Georgia alumnus Sean O’Keefe learned there was a way he could make a difference during the Coronavirus Disease 2019 (COVID-19) outbreak, he didn’t hesitate to act. 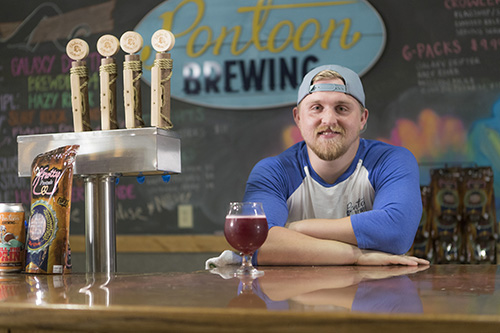 O’Keefe, who received his Master of Business Administration from UWG, is the CEO and co-founder of Pontoon Brewing Company, a craft beer brewery located in Sandy Springs, Georgia, that opened in December 2017. The location includes a taproom with an extensive selection of beers and a back-of-house brewery in which more than a dozen varieties of beer are brewed, canned and stored.

O’Keefe was recently in Florida promoting his company and celebrating a new distribution deal in the state when news of COVID-19 began dominating the airwaves. He learned how quickly the virus was spreading and the unprecedented impact it was having across the country.

Promptly returning home, O’Keefe decided to close his business – with the exception of curbside service – before any government mandates went into place.

“We felt like it was the right thing to do,” O’Keefe said. “We immediately aligned our practices with the CDC guidelines. We wanted to be on the safe side.”

O’Keefe and his brewmaster and friend, Chris Baratz, began brainstorming ways to help the community when they realized producing much-needed hand sanitizer was the logical choice due to their access to chemicals and large-scale production equipment.

As they were developing ideas on how to proceed, O’Keefe received a call from Nate Hanson, executive producer and on-air personality for “The Bailey and Southside Morning Show” on ROCK 100.5 (WNNX) in Atlanta. As fate would have it, one of the hosts had the same thought and was reaching out to O’Keefe to see if Pontoon could make it happen.

“Our host, Jason Bailey, came up with the idea to make hand sanitizer after seeing some do-it-yourself recipes on YouTube,” Hanson said. “He called me and asked if a brewery would be able to produce it. I told him if anyone can make it happen, it’s Sean at Pontoon."

“We went to Pontoon because whenever we're looking for a business to partner with for a charity event, they've always been first in line to help out,” Bailey said. “They're a great representation of our community.”

O’Keefe and his team jumped into action, employing an environmentally-friendly hand rub formulation posted on the World Health Organization website.

Now bottled and ready for distribution, O’Keefe is offering it free to whomever needs it.

“If you need it, there is no obligation,” he said. “We are asking for donations. We want to help Bottleshare and our staff, but if you’re hurting and you need some, just come by and pick some up.”

Bottleshare is a nonprofit organization founded to support craft beverage industry workers and their families when they experience adversity outside of the workplace.

“We understand there’s a lot of uncertainty out there with the announcement of restaurants and bars closing,” said Christopher Glenn, founder and executive director of Bottleshare. “While necessary, we know this will have an impact on our craft beverage industry and its employees. We at Bottleshare will do everything we can to support the community during this critical time.”

O’Keefe will appear on Bailey and Southside in the coming days to promote Pontoon’s hand sanitizer, Bottleshare, a GoFundMe campaign he launched for his staff and all the ways people can still purchase the company’s craft beer.

Besides promoting O’Keefe’s product on the air, ROCK 100.5 and the Bailey and Southside show will lend their branding to the product. 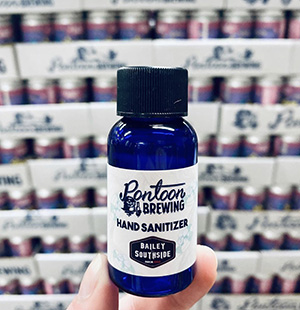 “They really wanted to contribute,” O’Keefe said. “We love them, and we love working with them.”

One positive outcome of the evolving COVID-19 situation, O’Keefe said, is seeing individuals and organizations come together to help one another.

“There are a lot of selfless people doing good things in their communities right now,” he said. “It’s nice to see that when people have the option to be good, they are. When all this is over, I think we’re going to be a lot stronger and a lot more united.”

In the meantime, O’Keefe is going to continue doing his part to help people stay safe.

“We don’t know how long this is going to last,” he said. “Our community is hurting, and we have an obligation to help.”

For more information on Pontoon Brewing Company and their efforts to aid the community, connect with them on Facebook or Instagram, or visit www.pontoonbrewing.com.