Dr. Karen Clevenger returned to the University of West Georgia carrying a ceramic figurine of a cheerleader she’d owned for more than 45 years. When she left campus, she left the figurine behind, and now it serves as a symbol of the UWG alumna’s generosity. 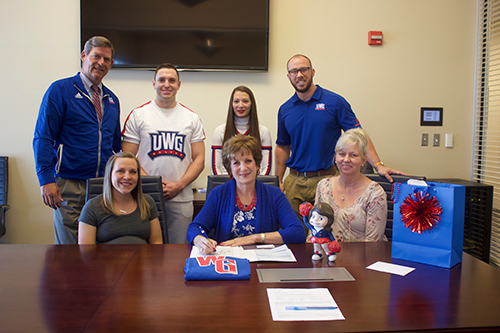 Clevenger, who cheered at what was then called West Georgia College from 1969 until 1972, pledged $35,000 toward the establishment of the Karen Clevenger Cheerleading Endowment. Part of the endowment will be awarded annually to a UWG cheerleader with a financial need.

“Cheerleading at West Georgia and coaching squads here brought so much joy to my life,” Clevenger said. “I’m so honored and humbled to be able to give back to something that made me so happy when I was here. I found my whole love of athletics, cheerleading and dance through my experiences as a UWG student, so the school will always be near and dear to my heart.”

Nicole Nichols, head coach of UWG Cheerleading, said the endowment provides many opportunities for the program to recruit prospective athletes and reward their upperclassmen for years of dedication and leadership.

“To be able to reward our student-athletes and give back to them for what they’ve worked so hard for will be amazing,” Nichols said. “Something I try to teach the members of my teams is that it’s all about the ones who came before us, the cheerleaders who paved the way so that we could position ourselves to be successful. Dr. Clevenger’s philanthropy will underline that idea.”

Daryl Dickey, director of UWG Athletics, said the cheerleading program would not be the powerhouse it is without her years of dedication, devotion and love for UWG.

“This gift she’s making will have a lasting effect on the area she loves – our cheer teams,” Dickey said. “This program has a long, rich legacy of passionate students, alumni and supporters who have had a great amount of involvement in its success. For Dr. Clevenger to step forward and lead that group with this gift is fantastic.”

Clevenger – currently a Venice, Florida, resident – has a long history with UWG since graduating with her bachelor’s degree in physical education and health. In addition to positions held in K-12 education and other higher education institutions, she has served as an instructor, assistant professor and cheerleading coach at UWG, also founding the college’s former dance company, Position One.

As for that cheerleader figurine, Clevenger said it was a gift from a former student who was taking a pottery class and knew she’d cheered at UWG.

“No matter where I was working in my 40 years of education experience, I always had my eye on UWG and the cheerleading program,” Clevenger said. “The amount of talent this group of student-athletes show every year has brought so much notoriety to my school, and I’ve wanted to help any way I could for a long time.”

Above all else, Nichols said, Clevenger’s gift will enhance something that not every university cheerleading program has: a community of supporters.

“There’s a foundation that’s been laid, and we don’t want our current or future student-athletes to ever stray from that longstanding tradition of excellence,” Nichols said. “It’s their job to leave this program better than they found it so that the students who follow them will want to be associated with UWG Cheerleading – just like our current students want to be involved with the program because of the network of alumni supporting us.”