You can find inspiration almost anywhere. Many turn to the vast network found on social media. And for Michelle Hanna Fuller’s Facebook followers, that’s where they went. Posting inspirational devotionals on social media soon led this University of West Georgia alumna to write a book. 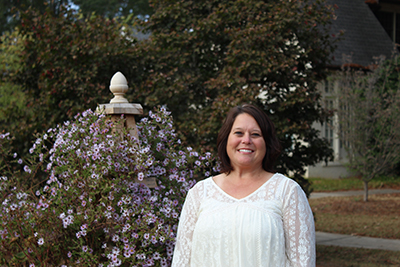 “After I had posted several devotions on Facebook, friends began commenting on my posts saying that I should put them into a book,” Fuller said. “I didn’t really consider it at that time since I had just written a few of them.”

But with encouragement from her grandmother, Fuller began the pursuit of publishing the book, “Reflections of God's Grace,” this past February.

“My family and friends came out in droves to my first two book signings to celebrate the release of my book,” Fuller recalled. “I’ve had a friend host a book signing at her house, and many friends have purchased multiple books to give as Christmas presents.”

The process of turning the devotionals into a book may seem arduous, but not for Fuller.

“I compiled them all into a Word document that I could submit as a manuscript,” she said. “I Googled ‘self-publishers’ and submitted my manuscript to the first two that God led me to. I will say that because this was God-driven, it really has been a fairly easy process.”

Choosing to self-publish, Fuller invested her own money into the book. However, she said the education she received at UWG gave her the confidence to move forward on this path.

“I earned a BBA in business information systems with a minor in accounting in 1993,” she said. “Those business management classes have given me the foundational knowledge for forming my own business, Michelle Hanna Ministries, LLC. And because of my minor in accounting, I am able to keep my own books.”

Not only did her major help her publish the book, her elective classes were also beneficial.

“I never thought I would need the skills I learned in marketing, which was a required course for any business major, but those have been put to use as well as I have planned book signings and events,” she said.

Fuller said she has advice for students who haven’t found their passion yet.

“Don’t give up! I would also tell them to trust God’s plan for their lives,” she shared. “There are many promises in the Bible that we can depend on and that we can cling to when we are searching for God’s will.”