In the late 1960s, Greek organizations did not thrive on campus as they do today.

In fact, no official fraternities or sororities existed at the University of West Georgia - then called West Georgia College - until 1968. When the administration turned down student requests to form official chapters, ambitious young people took matters into their own hands. They formed 12 unofficial chapters from the ground up, creating their own charters and bylaws and even developing original names, crests and insignia. 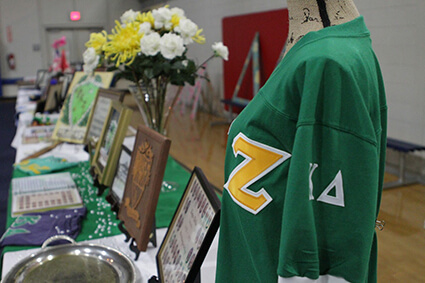 This was the seed that germinated and grew into the prosperous Greek life UWG knows today.

It is also why the 50th Anniversary Greek Founders Reunion, held March 9 and 10, was so important to students, alumni, the university and its culture.

“The original 12 Greek organizations grew so fast and developed so many great projects that the official organizations visited campus to invite them to affiliate,” said Denice Perdue, assistant director of alumni relations, who played a key role in organizing and facilitating the reunion. “The Greek movement was so popular and successful across campus that the administration agreed to allow the sororities and fraternities to become official Greek chapters.”

“The grit and determination of this group is a direct reflection of the time period at West Georgia College,” added Larry Hansard, one of the original founders who helped organize this year’s events. “We didn’t have all the conveniences students have today. All we had was each other. Those friendships have lasted more than 50 years, and it’s been great to get this group back to where it all started.”

One can imagine the great college experiences these founders shared in the late 1960s and early ‘70s, and how much they had to catch up on. For this reason, the reunion kicked off with a Friday night meet-and-greet. More than 100 Greek founders reacquainted with their brothers and sisters at the UWG Alumni House. To break the ice and get the fond memories flowing, the UWG Center for Public History encouraged founders take part in its Memory Mapping Project.

Founders participated by telling stories they associated with specific locations on campus, writing those stories on cards and placing them on a large map. Given the era of the Greek founders at UWG – from 1967 until 1972 – many of these stories centered around the Vietnam War. Some remembered waiting with great anxiety in a large hall to hear if their draft numbers were called - a lottery that could have changed their lives forever. The Center for Public History will use this and other stories as part of its ongoing Oral History Project.

The next day, founders gathered for an afternoon campus tour. Guests took in some familiar sites, but they were also treated to view recent growth and renovation of facilities at UWG including the athletic complex, The Coliseum and the biology building, among others.

The Ingram Library presented a special exhibit of Greek memorabilia curated especially for the tour. Another stop at the Bonner House presented attendees with a viewing of the exhibit, “Love, War, and Politics: West Georgia’s Counterculture.” The exhibit tapped into the 1967-1972 era experienced by the UWG’s Greek founders.

Festivities continued into the day with a gathering at the Greek Village Open House, where current students were able to meet their Greek forbearers.

“Each of the Greek chapters held a welcoming reception for their Greek founders,” Perdue said. “They socialize together, and the students recognize the significance of the Greek founders. Meeting with the current students is one of their favorite events.”

The reunion weekend came to a close with about 200 alums attending the Greek Founders dance.

This year’s Greek Founders reunion was the second one held by the UWG Alumni Relations Team.

“They have the best time reconnecting with old friends,” Perdue said. “It’s really awesome to see them pick up right where they left off.”