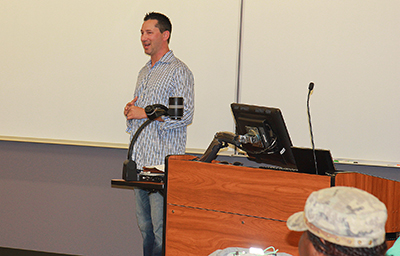 Students actively listened while Todd shared stories of his past and explained how his mistakes during his college years and internships helped shape his current career as an ESPN anchor.

Born in Hattiesburg, Mississippi, Todd was educated at Wingate University on a soccer scholarship, but later transferred to University of West Georgia, where he earned his mass communications degree.

“I liked West Georgia because of the small class sizes and because I could really get hands-on experience with the teachers,” he said.

Todd began his career in the television industry with KTVO in Ottumwa, Iowa, where he worked for 18 months. He then transferred to KOLD-TV, where he became a sportscaster for five years. In 2004, he joined WWE as an announcer. Currently, Todd is an anchor on ESPN SportsCenter. He is also the host/blow-by-blow announcer for ESPN’s iconic boxing program “Friday Night Fights.”

During his talk, Todd compared UWG to other universities by emphasizing how UWG gives students more “freedom to cover the stories that they want, when they want, and beat their own path.”

He went on to talk about one of his strongest skills, which is being able to block out all noise and distractions when he is on air. An example where Todd has to apply this skill the most is at wrestling matches, where the crowd is chanting and shouting while he is broadcasting live.

“I always knew that I wanted to do some kind of describing the action,” Todd said, mentioning that you have to start from the bottom and work your way up.

During his time at UWG, Todd was heavily involved with the campus television news station, UTV13. His time at the station is what made him realize that he enjoyed working in front of the camera and that he wanted a career in the communications field.

He concluded his talk by leaving students with these final words: “In order to make it in television, you need a lot of luck, a lot of friends, and a little bit of skill.”