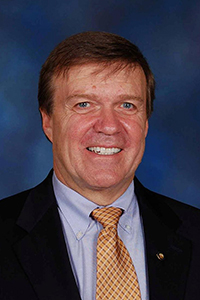 Dr. Heaberlin’s gift to UWG is only the latest in his long history of extraordinary contributions to the community. He serves as the senior director, chief administrative officer of off-campus programs at UWG Newnan, and is a long-time resident of Coweta County. He is a nationally recognized educator and retired principal. His leadership roles include being a founding principal at Lee Middle School in Coweta County and principal at Temple High School in Carroll County.

Why did you donate in your parents' names? This was easy! The Heaberlin family dedicated this scholarship in memory of my deceased parents, who modeled a commitment to their community. Bob and Louise Heaberlin were married for 55 years before my mom's untimely death in 2005. My dad served in the U.S. Navy (1947-1957) and the U.S. Air Force (1957-1970) retiring with the rank of Senior Master Sergeant after returning from a tour of duty in Southeast Asia during the Vietnam Conflict. My parents raised five wonderful children (Bob Jr., Linda, George, Susan, and Dale). My family lived in several different places, including Leon, France, while Dad served in the military.

After retirement, my dad opened a Chevron Service Station in Warner Robins, Georgia. He operated Bob's Chevron from 1970 until 2014. My dad was a successful businessman and my mom was his bookkeeper. My two brothers also worked for him to help make the family business an "icon" in Warner Robins. My dad was heavily involved in the Warner Robins Noon Day Lions Club for 44 years and worked hard to support the Georgia Lions Camp for the Blind. Dad was a district governor, a club president, and served on the Lions board for several years. Along with my mom, he was involved in several charities in Houston County, and he was named the Senior Citizen of the Year in 2013 for Bibb and Houston Counties by the Macon Telegraph newspaper.

Why do you feel it’s important to give back to the university? My dad graduated valedictorian in his class in 1947 at Kitts Hill High School in Ohio. His family was too poor to send him to college. Dad grew up on a dairy farm, and his mom and dad worked at the Dayton Malleable Iron Company in Ironton, Ohio. Dad joined the Navy soon after graduation. Mom graduated in the top 10 of her class at Ironton High School in Ironton. She played in the band while in high school, but her parents were also too poor to send her to college.

Education was stressed to us as children as a means to accomplish great things in life. Mom and Dad always checked our report cards and helped us with our homework. I was the first person in my family to graduate from college. Although my parents were unable to pay for my education, I was able to work at the Dayton Malleable Iron Company in Ohio for four years in order to pay my tuition to Ohio University and graduate in 1972. After earning a master’s degree from Francis Marion College in 1984 and a specialist degree from then West Georgia College in 1990, I earned a doctoral degree from the University of Georgia in 2000. This was a proud moment not only for me, but also my parents. The work ethic that they instilled in me helped me earn my degrees.

How were your parents a major influence in your life? My parents made many sacrifices to provide for five children. They never complained. Dad usually had a second job to make ends meet, and later Mom went to work as a bookkeeper when we grew older. Mom and Dad taught us to love each other, respect other people, work hard, have manners, be kind, clean house, and do what is right. They were inspirational. I loved and respected my parents, and I still do.