Going through a divorce, raising her three-year old son and preparing a high school senior for college, the last thing long-time University of West Georgia employee Renet Jones wanted to hear was those three dreaded words, “You have cancer.” 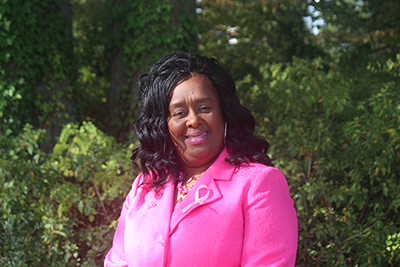 “My first thought was death. I was overcome with fear,” Jones recalled. “I didn’t know if I would be able to raise my son.”

It was in 2010 while she was playing with her son when she first noticed the lump in her breast. Recognizing what this could mean, Jones immediately contacted her doctor and went in for an appointment the very next day. With very little time to process everything, Jones was sent in for a full body scan and two biopsies.

“The results came in, and I had stage 2 breast cancer,” she recalled. “My doctor said it was the size of a peppermint, so every time I see a peppermint, I think of cancer.”

From there she went through six injections of chemotherapy, which was later followed by radiation.

“The first injection wasn’t really bad because it wasn’t in my system, but the second was so bad,” said Jones. “It was also the time when my doctor told me to shave my head to avoid the experience of seeing it fall out.”

And even though she was in the midst of a divorce, Jones remembers the day her then-husband offered support and shaved her head – a moment that she says was the toughest for her because her son didn’t understand what was going on.

“I loved my hair, so it was a bit devastating for me because my son didn’t think I was attractive mommy anymore,” she shared. “Now, we are able to laugh about when I cut my hair and some of the comments he made. That’s why it’s so important to have a support system. My mom and church members were amazing. Knowing you have that love makes you want to survive.”

Jones was also able to find support from her colleagues. The phone calls, emails and cards kept her going. There was even one coworker who was also battling cancer at the same time as Jones, and that brought her a different level of comfort – they referred to themselves as “breast buddies.”

“Renet always kept such an upbeat attitude about everything she was going through,” said Denise Colquitt, a UWG payroll accountant and more than five-year breast cancer survivor. “Seeing her get through cancer with all its ramifications inspired me that I would also get through it. She was so encouraging, and having someone to talk with that truly understood where I was coming from was a big help.”

Even though Jones had to take a year off of work, she knew she had to find strength to support her daughter as she had been chosen as the first African-American drum major for her last year in high school.

“I would go to my daughter’s games and sit in the car and watch her perform from a distance to stay away from germs because your immune system isn’t as strong when you’re going through chemo,” she shared. “I was determined not to let this get me down. I continued to get out and about, even if I had to wear a mask.”

Though looking back on that time in her life is still very emotional for Jones, she knows that the experience has given her the courage to overcome any obstacle.

“Hearing the words ‘you are cancer free’ was sweet music to my ears. Even though it’s been seven years since I was diagnosed, it still feels like it was just yesterday. There’s not a day that goes by that I don’t think about it,” she added. “I pray to God that the cancer doesn’t come back, but I know now that I am more of a fighter.”

Today, Jones is in her 23rd year at UWG and enjoys the opportunity to share her story to encourage others to not be afraid and to get detected early.

“With all of the research that has been done on cancer, I want people to know that they have a better chance of living long, cancer-free lives,” she said. “Don’t give up. Hang in there. Pray a lot, stay active and let your family give you lots of love.”