If you asked two-time Teacher of the Year Katy Eason what one experience at the University of West Georgia had the most profound effect on her, she wouldn’t be able to answer. 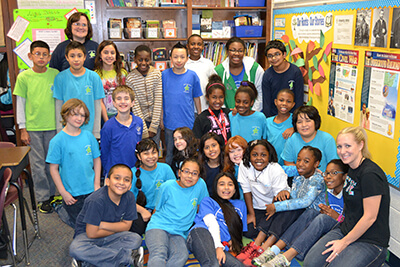 “My experience as a whole had an impact on me,” mused Eason, who transferred West from a large university in Tennessee. “In the first few weeks of my classes at UWG, I felt like I had made more connections than I had done in an entire year at my previous school. At UWG, I was more than a number. I got to build relationships with my peers and professors, and I enjoyed the small town feel that Carrollton provided while also enjoying the size—physical and population—of the university.”

But after graduating from the College of Education in 2010, Eason left UWG and entered a job market unsettled by economic turmoil. Local school systems announced they were laying off hundreds of employees, adding furlough days and facing budget cuts.

“As multimillion dollar deficits loomed over Georgia, I somehow managed to stay focused on my goal of becoming a teacher,” she recalled.

Her forward-looking approach paid off. She has spent the past seven years working at Sawyer Road Elementary School in Marietta City Schools (MCS), the first six of which were filled teaching a fifth grade inclusion class serving students in gifted, English-as-a-second-language and special education. She moved to third grade this year.

“I am an extremely driven person,” she explained. “I love seeing growth, both personal and academic, in my students.

“I also recognize that my role as an educator differs from child to child,” she continued. “While most often this is providing students with a safe learning environment, sometimes it is to provide snacks, shoes or meals for students who are struggling to have their basic needs met. I appreciate the differences in each child.”

Eason said that although she’s attended three separate universities in her higher education journey, UWG has made the biggest impact on shaping her into the teacher she is today.