Yanique Leonard is living every ’80s baby’s dream – not to mention the other generations of fans fascinated by Jim Henson’s cult classic “The Dark Crystal.”

Yanique Leonard discusses her experience at UWG and the Center for Puppetry Arts.

As collections manager at the Center for Puppetry Arts, Leonard, a University of West Georgia alumna, works closely with more than 50 items from the 1982 movie that includes sketches, prototypes and – of course – puppets.

The exhibit, Jim Henson's The Dark Crystal: World of Myth & Magic, is Leonard’s first major project with the center. It will be on display for one year.

“I love working in Thra, the fantasy world that Jim Henson created,” she shared. “It’s completely different from Sesame Street and the Muppet Show. You have woodland creatures that are abnormal-looking in a story that was told in such a beautiful way. It was really before its time.”

The exhibit walks visitors from concept to creation and allows them an up-close-and-personal look at multiple characters, including Jen, a Gelfling who sets out to find the Dark Crystal and restore balance to the universe; urAc the Scribe, a gentle wizard belonging to a race of creatures called the Mystics who are counterparts to the evil Skeksis; and Aughra, the three-eyed, horned embodiment of Thra.

It’s Leonard’s responsibility to keep all items – from a small Skeksis skull to larger-than-life urAc – in prime condition.

“Most of my work here is supervision – make sure everything is taken care of and to ensure if anything happened I am on hand to help fix the problems,” she described. “I also assist our exhibit director in mounting the pieces in the displays and setting up the exhibition design.” 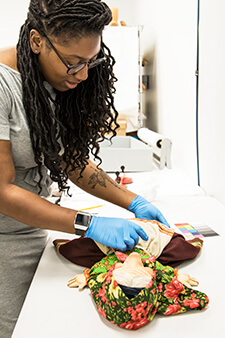 But Leonard’s reach extends far beyond the Dark Crystal exhibit. She also cares for the center’s more than 3,500 collections and manages its archives and library, the largest in the nation for the art of puppetry.

“Overall, my job entails so many different tasks,” she explained. “A majority right now is conditional reporting and rehousing. I am also involved in securing loans, which is where I go to different institutions and organizations to see if they will loan us their objects to use for our exhibitions.”

Leonard said she credits UWG for everything she knows about the museum world.

As a young undergraduate at Clayton State University interested in pursuing her master’s degree, she was encouraged to Go West after earning her B.A. in history.

“I had a professor at Clayton State who knew Dr. Ann McCleary and advised me if I wanted to go into public history, UWG was the way to go,” Leonard said.

After meeting with McCleary, professor and director of UWG’s Center for Public History, Leonard enrolled in the public history program in fall 2014. There, she had her first museum education class at the Atlanta History Center.

“During that course, we had a roundtable of directors and managers come in,” she recalled. “The collections manager for the Center for Puppetry Arts was there, and she gave me her card. Little did I know that four years later, I would be in that position. Dr. McCleary was amazing at networking and introducing me to different people within the museum field.” 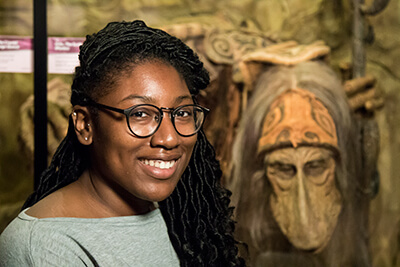 Because of those contacts, Leonard spent the next four years supplementing her graduate education with multiple opportunities that allowed her to hone her craft.

Her first foray occurred as research director for the West Georgia Textile Heritage Trail shortly after arriving at UWG. From there, she spent almost four years working various jobs for the National Park Service, her last position serving as museum technician for the Martin Luther King National Historic Park in Atlanta.

Leonard passionately reiterated that none of it – neither past pursuits nor current profession – could’ve happened without McCleary and UWG.

“Thanks to West Georgia, I’ve been able to see some amazing artifacts in different institutions and organizations,” she concluded. “My time at UWG taught me that to fully understand something and appreciate it, you have to immerse yourself in it. To get emotional talking about the Center for Puppetry Arts definitely shows me that I have delved into the world of puppetry, and I am enjoying every minute of it.”