For Angie and Mike McConnell, the University of West Georgia holds a special place in their hearts. It’s where the couple of 28 years met. It’s where they met long-lasting friends. It’s the university Mike represented at the 1982 football championship. It’s where they had a one-of-a-kind educational experience. 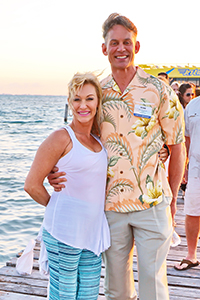 “Some of the best moments in our lives started when we were in Carrollton [at UWG] together,” Mike recalled.

Mike graduated in 1985 and Angie in 1984. The couple has lived all over the country and only recently moved to Nashville, Tennessee, with their two daughters, Carson and Andie, as part of Mike’s role as vice president of Sales, Financial Products and the Corporate Planning Office for Nissan Motor Acceptance Corporation. So when the McConnells recently returned to Carrollton for a visit to UWG, they were pleasantly surprised by all the growth that had taken place over the years. However, they said UWG still hasn’t lost that special something.

“As soon as we stepped back on campus we got a feel for that same culture that was here when we were here – the vision and the energy, that feeling of unlimited promise of what you can do,” Mike said. “And the growth that is possible really got us motivated to see that continue.”

As a result, the McConnells decided to create an endowment of $25,000 to be used to benefit UWG student athletes in need. The criteria the couple settled on for bestowing the gift mirrored their own experiences here at UWG.

“We both spent a lot of time participating in athletics growing up. Angie was on the co-ed cheerleading squad at UWG, and I was on the football team,” Mike said, “and we both have a strong belief that athletics is a great paring with academic success because it helps prepare you for life. We also feel that the way you measure success is how you help others and help them achieve their goals, so it made sense to us to recognize UWG and those special moments we experienced here and, hopefully, in some small way impact a young person's life, because everyone needs a little help and support sometimes – especially when it comes to getting a college education.”

The Angela Kirk and Michael McConnell Scholarship Endowment will be awarded to a UWG student athlete who is majoring in business, has a GPA of at least 2.7, and is in need of financial assistance. The McConnells say they are excited to give back to their alma mater.

“We feel blessed to be a part of UWG,” Mike said. “There's so much growth right now, we're excited to be a part of it. As long as we were away, it's been amazing to see the transformation over the years, and it really validates what is possible.”