Born in Guyana and then moving to New York to work in the business sector, Nadia Prince-Williams found herself in need of medical attention. While reflecting on the need for compassion in healthcare, Prince-Williams met a wonderful nurse. 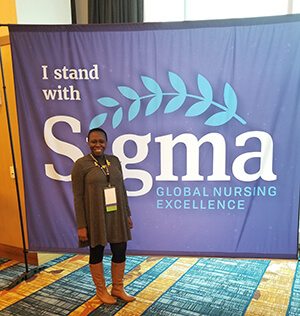 “She sensed my vulnerable state and met it with the patience and kindness I needed,” Prince-Williams said. “This experience moved me so much that I resolved to become a member of the healthcare profession, so I could provide compassionate care to patients.”

Prince-Williams later moved to Georgia and applied to the Tanner Health System School of Nursing after learning about the University of West Georgia through coworkers who were also UWG alums.

“These coworkers were knowledgeable and conducted themselves in a manner that led them to gaining the respect and admiration of their team,” Prince-Williams stated. “In conversations about their training, they always would speak fondly and express thanks to their alma mater for the part it played in molding them into the academically strong professionals they became.”

After her graduation in May 2017 with her MSN-CNL Track, Prince-Williams became a clinical nurse leader at WellStar Paulding Hospital.

As part of the Rising Stars of Research and Scholarship Program, Prince-Williams recently attended the Sigma Theta Tau 44th Biennial Convention in Indianapolis, where she presented her research titled the Impact of a Structured Palliative Care Program on Unit Readmission Rates.

“I did an assessment of the unit I was doing my immersion in to identify issues/barriers the unit was facing as it pertains to patient care,” Prince-Williams explained. “I found that there was a problem with preventable readmissions, namely in end-stage chronic obstructive pulmonary disease (COPD) and end-stage congestive heart failure (CHF) patient population.”

After consulting the evidence and finding evidence-based practices to address the identified barrier, the evidence showed the importance of palliative care consults in the care of this population.

“Education was provided to the team about the existence and use of the proactive palliative care tool,” Prince-Williams continued. “A structured palliative program was implemented on the unit as a standard work flow when caring for patients, lowering readmission rates for COPD and CHF below our target number.”

Based on her conversations with coworkers, Prince-Williams’ decision to choose UWG came easily.

“I am in the process of getting where I want to be ultimately,” Prince-Williams concluded. “Undoubtedly, UWG has helped equip me with the tools and knowledge I need to grow in my profession.”