In a media environment that seemingly thrives on scandal and sensation, the McDuffie Progress goes against the grain by focusing on community development and childhood reading. The newspaper’s dedication to civic journalism has paid off, as it was recently named one of the “10 Newspapers That Do It Right” by Editor & Publisher Magazine, a 114-year old publication based in Irvine, California. 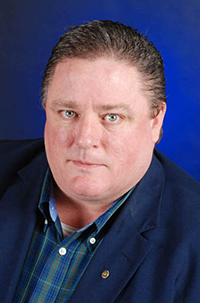 Based in Thomson, Georgia, the McDuffie Progress is a weekly newspaper with a circulation of 3,000. This figure is even more startling when compared with fellow honorees--such as the San Francisco Chronicle, with a daily circulation of 201,996, and the Oklahoman, which peaks at 154,426 on Sundays.

Being placed in such hallowed company is something that Wayne Parham, McDuffie Progress editor and publisher, and University of West Georgia alumnus, can scarcely believe.

“We are excited to be placed among some of the great newspaper names from across the country,” he said. “The ones picked for this honor usually have huge circulation numbers.”

Wayne said that the weekly was chosen “for [its] unique approach to using [its] mascot to help encourage children in area schools to read and for [its] focus on keeping news content local.”

Wayne, who graduated with a bachelor’s in mass communications from then-West Georgia College in 1990, credits the education he received for his current success as an editor and publisher.

“The print journalism courses at West Georgia provided a solid foundation of techniques and principles that have guided me throughout my career,” he said. "Every course impacts what I do today.”

Before joining the McDuffie Progress, Wayne also worked at the Haralson Gateway-Beacon in Haralson County, Georgia, and at Georgia Trend Magazine as a senior photographer. He has also served as the publisher of the Enterprise-Tocsin in Indianola, Mississippi.

In addition to his roles as editor and publisher of the McDuffie Progress, Wayne is in charge of multiple publications, including Classic South Real Estate Home Guide, a monthly magazine, and mcduffieprogress.com.

“Students should know that what they learn in a mass media law class, an editing class, and newswriting or magazine writing classes will be with them their entire career,” he emphasized.

Editor & Publisher Magazine is an influential publication that deals with all aspects of the newspaper industry, from the newsroom to marketing and circulation. The McDuffie Progress’ honor was highlighted in an article on the Editor & Publisher’s website and was featured again in the magazine’s March issue.