When Troy Vollenweider was growing up, his parents lived so close to the University of West Georgia, they could walk to campus. 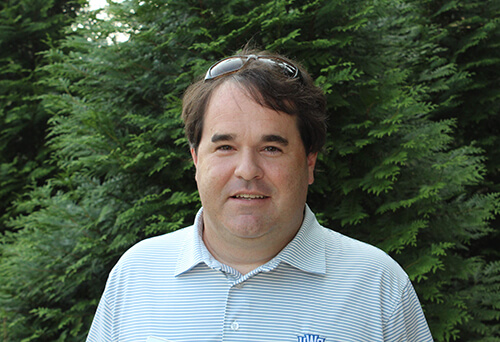 As an adult earning his Master of Business Administration degree from the Richards College of Business, Vollenweider didn’t have to come to campus at all.

“I truly grew up in the shadows of UWG, and it’s always been a second home to me,” Vollenweider said. “My parents met at UWG, and I’m so grateful they ended up living there while I was growing up because it allowed me to fall in love with the campus and community.”

Seeing opportunities for growth after more than 15 years in the finance industry, Vollenweider enrolled in UWG’s WebMBA program, allowing him to earn his graduate degree from a distance.

Vollenweider said he misses graduate school – and the connections he made with his fellow students online – since graduating in May.

“The team atmosphere I found through earning my MBA online set it apart from anything else I’ve ever done,” Vollenweider said. “If anyone thrives in that team atmosphere, you can’t beat it – even if you’re local to UWG. We learned so much from each other and really leaned on each other. You can’t even put a value on that.”

Vollenweider earned his bachelor’s degree in management in 2000 and found success in a variety of roles in the financial sphere – from assistant vice president of a bank to a chief operating officer at his family’s real estate investment firm.

“Right after graduation, I found a lot of success in my career, thanks to my undergraduate classes setting me up for success,” said Vollenweider, who landed his first job as a traveling auditor because of a connection made at UWG Career Day before his graduation. “Earning my MBA earlier this year, I was offered a job two weeks after graduation, so that set me up for success to move into those higher roles I was reaching for before.”

Vollenweider currently serves as a project financial analyst at Focal Point Data Risk in St. Simons Island, where he’s resided since 2014. In his role, he offers auditing and consulting in data security and provides in-depth cybersecurity training.

“In 2004, my father was diagnosed with cancer, so I moved back to Carrollton to run the family business, Summerhill Properties,” Vollenweider said. “At that time, he was against my getting my MBA since he was afraid it would distract me from running the business. However, I got to a point where I needed to take the next step. I had some opportunities, and they told me I’d be great for the job – if only I had my MBA. So 10 years after my father’s death, I applied to go back to school. I’m pretty sure he would forgive me for that.”

Vollenweider said he considered no other school than UWG when applying for graduate school.

“I had such a great experience as an undergrad, there was really no other choice,” he said. “Being able to talk to the professors and get help whenever I needed it was a huge help for me. I always knew I could call my professors or go by their offices, and they would be there to talk me through things in an effort to help me succeed.”

“I thought UWG was great when I was there as an undergraduate student, but the growth it’s achieved and the direction it’s headed makes me wish I could be there now,” Vollenweider said. “I wouldn’t want to go anywhere else. I got more out of my experience than I would have at a larger school, but I went somewhere that has all the same accreditations and reputation as those bigger schools. I’m excited to see where UWG is going. I think the future is really bright.”