Going from mentee to mentor, Fredrick Bailey knows what it means to pay it forward. 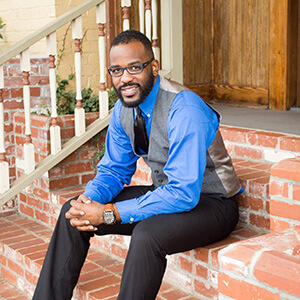 Graduating from the University of West Georgia as an early childhood education (ECED) major, Bailey has fostered long lasting relationships throughout his career as an author, motivational speaker and mentor.

Bailey began his journey in mentorship in the seventh grade with Communities in Schools (CIS), a national partnership with businesses, healthcare providers and other nonprofits within a community to provide resources to schools to help at-risk students succeed. He was referred to the program by his teacher, who noticed he was having trouble seeing the board in class. With the help of CIS, he received new glasses, a necessity that improved his success in the classroom.

“I developed an interest in peer mentoring because I had a few mentors myself,” he said. “I always thought it was my calling to mentor others and give back.”

Bailey is the first recipient of the Bill and Jean Milliken Alumni Fellowship, a new initiative of CIS that will allow him the opportunity to research innovative ways to advance CIS for future generations.

“I always dreamed of being a poster child or an advocate for CIS, but I never thought I’d be spending my time in a position of service within the organization,” he shared.

At UWG, Bailey found he could further develop his interest in peer mentorship by also being involved with the African-American Male Initiative (AAMI) at UWG.

“AAMI was a good experience overall,” he recalled. “I had three peer mentees, and I talk to some of them to this day. This opportunity propelled me to coauthor a grant to start an AAMI at Gordon State College.”

Bailey recalled how relationships were valuable during his undergraduate career.

“My mentor reached out to another administrator on campus on my behalf, and because of the power of relationships, I got a job working in the financial aid office,” he said. “Working there allowed me to learn a lot about people as well.”

“Be genuine and honest to yourself first,” he said. “Have positive motives when trying to build relationships with others.”

Bailey also learned how to apply his knowledge of relationships to the classroom. He credits the ECED program for training students the art of teaching.

“I learned that as a teacher I’m not the most important person in the room – it’s the students,” he said. “When I walk into the room I’m always prepared to teach, learn and grow even if I taught that day’s concepts a million times. It feels great to apply what we learned in the classroom to actual students, and it gives me a sense of giving back.”

Bailey’s inspiration for paying it forward are the many success stories – whether they’re recognized by others or not.

“I enjoy seeing people who have little but are able to produce so much more,” he concluded. “I hope to be working in a progressive career that brings about change in the lives of people now and in the future.”