It wasn’t what Frank Pritchett learned in a University of West Georgia classroom that impacted him the most.

While he certainly learned the mass communication trade and made valuable contacts that continue to inspire him today, Pritchett says the university became his window to an illimitable world full of differing viewpoints, experiences and people.

“Because no one at West Georgia knew me, it really gave me a fresh start on the rest of my life,” said Pritchett, a self-described “scrawny, awkward kid,” who regularly faced the aggression and taunting of early and high school bullies. 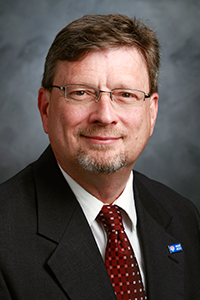 “I could define myself by my experiences, not by what others thought,” added Pritchett, who recently finalized plans to leave his estate to the university because of the emboldening role it has played in his life. “I could let my past go.”

But it almost didn’t work out that way.

College was not on Pritchett’s radar when he graduated from high school in his rural hometown of Powder Springs, Ga. Stepping into the real world of 1978, he had his sights set on a vehicle of another type to propel his future.

“None of my siblings had ever had a new car,” he explained. “I wanted a new car.”

To begin that drive, Pritchett signed on as a deliveryman for a local auto paint and parts store. For the next six years, he carted supplies to body shops in different parts of metro Atlanta, supplementing his income by covering races at Dixie Speedway, where his father was an amateur driver, for Racing News.

Pritchett employed a team of local youths to sell copies of the regional tabloid. For every copy sold, he’d give them a dime – “20 cents if they were good and sold a high volume” – keep 20 cents for himself and return the remaining 70 or 60 cents per issue to the publication.

‘It wasn’t lucrative, but I had front-page bylines from the races,” Pritchett said. “That started my journey of playing with words.”

Before long, his entrepreneurship and creativity caught the eye of the auto supply shop owner’s wife, herself a UWG alum. By then, he had progressed from deliveryman to assistant manager. During a regular conversation, the lady offered that she felt Pritchett was too talented for the job, suggesting he further his education at the university.

“Months later, there I am, sitting in a classroom at Marietta High School,” he remembered, adding that his parents’ only goal for their children was to graduate high school. “It was a cold, dreary day as I took the SAT, telling myself I wanted to be more than was expected.”

Next came a provisional acceptance from the university, then matriculation toward a degree in mass communications. Working to be more than was expected, Pritchett used the $8,000 he so diligently had saved for a car to fund his education.

With his skill of playing with words fueling a dream of composing colorful, captivating copy for magazines, Frank focused on honing his writing skills. He eventually reported his way to the editor’s chair of The West Georgian, UWG’s student newspaper, and a stint in the university’s public relations department where he was mentored by then-director David Parkman.

Continuing to push beyond the expected, Pritchett longed to explore well beyond the borders of the world he knew. A love of French culture and history led to a minor in the language and a longing to study abroad in the land of the enlightenment.

“When I left to study in Dijon, it was the first time I had been in an airport, much less on a plane,” Pritchett said. “That’s what had the greatest impact on me, being able to see the things I had read about or seen in movies. That was my period of greatest personal growth.”

Bolstered by that sense of self-discovery and a new degree, Pritchett ventured beyond West Georgia, using what he learned there to land a job covering public safety and courts for the local Carrollton newspaper, the Times-Georgian.

His time away from the university would be short as Parkman came calling, encouraging Pritchett to apply for a job as public relations coordinator. Over the years, he would progress through different positions in PR and alumni relations, becoming director of alumni relations in 2006.

Along the way he helped expand the school’s alumni association across Georgia and into other states; developed a university magazine; created a heightened culture of giving within the alumni board; planned UWG’s largest reunion by hosting more than 300 alumni for a Greek life event; and won a district award from the Council for Advancement and Support of Education for a campaign marketing the university’s Centennial A Day fundraising event.

After 32 years of life on the UWG campus – including earning a master’s degree in guidance and counseling – Pritchett never forgot how his time as a student and the support of those who poured into him along the way helped shape his path. That’s why he chose to leave his estate to the university to fund three new scholarships.

The first, which will benefit students pursuing writing careers, honors Jim Dahl, in iconic creative writing professor who once wrote upon one of Pritchett’s papers, “You are smart. Speak up more in class.”

“That truly was a defining moment,” Pritchett recalled of the feedback, which came at a time of heightened doubt about his decision to attend college. “I had never been told I was smart. That gave me confidence and removed any doubt I belonged there.”

“This is my way of paying it forward,” Pritchett said. “There were so many people who invested in me as friends, mentors, and educators. I have a responsibility to do the same for others. We all can give, whether it’s $10 or $100 or more. I’m happy knowing I can invest in and help the coming generations unknown.”

Leaving your estate to the University of West Georgia provides a unique way to impact the lives of students for generations to come. For more information, contact Baylor Basset, director of legacy giving, at (678) 829-6134.