As an attorney and advisor to top Washington politicians, Randy Evans has blazed a trail around the world.

His latest stop will be in Luxembourg as the U.S. ambassador to the European nation as nominated by President Donald Trump. Evans, a 1980 alum of then-West Georgia College, has built a law career–including a partnership at Denton’s, the world’s largest law firm on the solid foundation he created while a student.

“I am currently working my way through the Senate confirmation process where I will hopefully get confirmed,” Evans explained. “Luxembourg is an amazing place with people who understand and appreciate freedom and democracy, with many connections to us Americans.”

Evans was drawn to West Georgia because of its nationally recognized intercollegiate debate program which is housed in the university’s College of Social Sciences.

“Indeed, in my junior year, Paul Weathington and I won many national tournaments and were third in the nation at the National Debate Tournament,” Evans said. “Much of my success is a direct result of participating in the debate program, which prepared me for law school and a successful career as a litigator.”

In addition to his involvement in the debate program, Evans was elected as Student Government Association president. As such, he met then-candidate Newt Gingrich, who later would help to shape national politics as the speaker of the U.S. House of Representatives.

“I have remained in constant contact with now former-Speaker Newt Gingrich,” Evans added. “I served as the outside counsel to the speakers of the 104th through the 109th Congresses of the United States.” 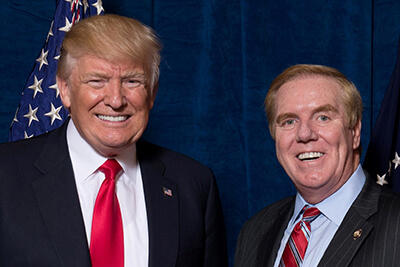 Evans also lectures across the United States, on topics from professional ethics to climate change and insurance.

When asked what advice he would have for prospective students, Evans stressed, “work hard, stay focused, appreciate family and country, and most importantly, have faith.”

“There is no one-size-fits-all for success,” Evans continued. “For each person, there is a unique recipe. But I have found that one of the most important ingredients is discipline. The academically strong stay on course. I have always defined discipline as doing that which you don’t want to do when you most don’t want to do it.”

Evans’ feelings on the quality education he received from West Georgia run deep.

“For anyone intending to pursue any profession, especially a legal profession, there is no better place to begin than West Georgia,” he concluded.