University of West Georgia College of Arts and Humanities alumnus Eric Smith (’04) recently won the 2017 Tampa Review Prize for Poetry. His winning work—Black Hole Factory, which will be published in 2018 by the University of Tampa Press—is a unique collection of poems with many different recurring themes and ideas that return throughout. 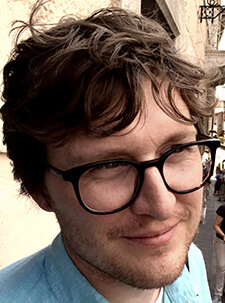 Although this is his first book, Smith has also had numerous works published in The New Criterion, Indiana Review, Southwest Review and the Best New Poets 2010 anthology. He has written critical prose for The Rumpus, Pleiades and the AWP Writers’ Chronicle. He is also the founding editor of the digital text message poetry called cellpoems.

Smith’s recognition does not end with the Tampa Review Prize for Poetry. Just shortly after receiving this accolade, he was also named one of the 19 recipients of the North Carolina Arts Council Artists Fellowship for some of his poems that ended up in the prize-winning book.

Smith, an assistant professor of English at Marshall University in Huntington, W.V., is currently working on a collection of essays on contemporary poetry in addition to his second collection of poems inspired by events and people he grew up around, stories he heard, and the funny memories of him and his friends while growing up in Carroll County. One piece that he has been working on takes place in the parking lot right outside First Tuesday Mall in Carrollton.

On his new book of poetry …

“It’s less about any one thing than it is how all of these things get smashed together. I guess if there has to be one thing it’s about, it’s gravity—how we’re rooted not just to the earth but where we come from; how we are shaped by the natural world, and by grief, and by loss.”

On what inspires him …

“Sometimes the poems come from lived experiences or emerge out of what I’m reading. Others stem from less likely places—I can’t tell you how many lines I culled conversations overheard in passing. Sometimes it was a rhythm or gesture I worked out in my head while listening to music or washing dishes or walking the dog.

“I think it’s important to know that, for me at least, the work is less often inspired by any one thing, and more often derives from very patient, attentive listening—to the world, to its art, to its makers.”

On being published by the University of Tampa Press …

“I’m overwhelmed and humbled by their willingness to take the book. And surprised by it, honestly. The University of Tampa has published so many writers whose work I admire. Richard Mathews and everyone at Tampa do incredible work by making space in the world for incredible poems. I guess more than anything, I feel lucky to be counted among that company.”

On his time at UWG …

“It was life changing. I learned to love language there. I found my calling there. I met my wife there. It may be a bit cliché to say so, but I wouldn’t be who I am, and where I am, had I not gone to West Georgia.”

On advice to current UWG students …

“Go to class. Go to things—readings, concerts, performances and lectures. If nothing else, go to the iron pours, which is still one of the coolest things I’ve ever seen. And read. Just read everything you can.”