University of West Georgia students in the UWG Marching Band face a difficult choice as they progress closer toward graduation. 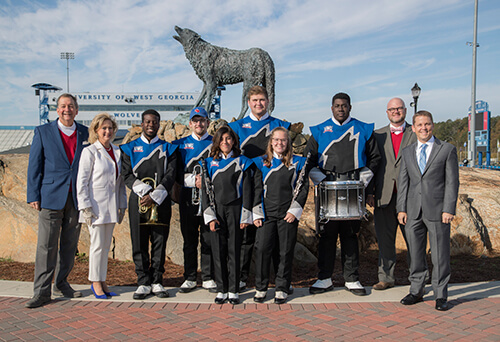 Do these upperclassmen stay in the band – sacrificing Saturdays in the fall and countless hours through the week for rehearsal – or leave the band to focus on their more rigorous course loads and part-time jobs that allow them to stay in school?

Now, thanks to a sponsorship launched by Carrollton residents Michael and Andrea Stone, fewer members of “The Sound That Lights the South” will face that dilemma. The Stones – through Milestone Investment Management LLC, a Carrollton-based financial management firm Michael founded – have committed to a five-year sponsorship of the UWG Marching Band.

Funds from the sponsorship will support students by providing scholarships for their academic classes. These scholarships will alleviate some of the burden on juniors and seniors to find time for outside employment in addition to band activities – on top of their studies.

Dr. Cale Self, associate director of bands at UWG and director of the UWG Marching Band, said approximately 50 percent of his members have a part-time job outside their academic work and the band.

“This is nothing short of game-changing,” Self said of the five-year commitment, the first of its kind for the UWG Marching Band. “For years, we have been working to get individuals and businesses to partner in the vision we have for the band program here at UWG. That Michael and Andrea Stone were the first people to step up is no surprise. We are incredibly grateful for their support.”

The Stones have been involved in the arts in the Carrollton community in a number of ways over the past two decades, with Michael serving on the board of directors for Carroll Symphony Orchestra for 15 years and the couple establishing the Michael and Andrea Stone Visiting Artist Series in the College of Arts and Humanities at UWG.

“We’ve always had a passion for good, artistic work, and it’s something we want to see highlighted in our community,” Stone said. “The small part we do in bringing light to the fascinating work the men and women in our community complete as artists is what makes our work worth it.”

Self and Dr. Josh Byrd, director of bands at UWG, are in their ninth year of working together at the university. That’s the longest tenure of a director and associate director in UWG’s history.

Byrd said retention through a student’s academic career at UWG has been a challenge since he joined the university in 2011.

“Our first goal as leaders of the UWG bands has been to increase the number of upperclassmen in our ensembles because that’s where the growth – both in number of members and quality of sound – will come from,” Byrd said. “Our growth this year has been almost entirely from upperclassmen staying in the band. Last year, we had nine juniors and seniors in the marching band. This fall, we have 21 juniors and seniors.”

Stone reiterated the importance of a high number of seasoned band members in an ensemble, saying leadership is best served through experience.

“If our most experienced band members are exiting after two years, there's a void of leadership,” Stone said. “By staying in the band, they learn to discipline themselves, but if the program is primarily comprised of new freshmen and sophomores, there’s not that seasoned group of people who guide the processes and procedures to keep everyone organized. That’s what we hope this sponsorship will help change.”

Self said graduation rates for band students are noticeably higher than students who aren’t engaged in campus organizations like the UWG Marching Band.

“If you’re in the marching band, that’s a pretty good indicator you’re going to stay in school and graduate on time,” Self said. “It’s going to be a positive influence on your life. The generosity of the Stones means it won’t be a financial burden for as many students anymore, and they can focus on attaining their degree in four years or less.”

That’s something Stone has seen firsthand in his loved ones’ lives, with his eldest daughter and his wife’s youngest son graduating from Clemson University and the University of Mississippi, respectively.

“The discipline they learned by being involved with the marching band at their schools went a long way toward ensuring they graduated on time,” Stone said.

Now, Byrd and Self’s goal is to increase the UWG Marching Band membership from 106 students – its current enrollment – to 175 by 2022.

“This scholarship will go a long way in making that vision a reality,” Byrd said. “Not only will we have that many students – who will bring their friends and family members – at the football games, but the depth of our sound and power will only grow as the number of upperclassmen we retain from year to year increases.”

Byrd and Self hope the Stones’ display of generosity will serve as a model for other entities to support UWG band programs in other ways. Michael Stone agrees.

“We are incredibly proud of our partnership with the UWG Marching Band and hope the support we provide will go a long way toward fulfilling Drs. Byrd and Self’s goals,” Stone said. “Beyond that, we hope our commitment will inspire other businesses and philanthropists to line up and want to pledge their support to a worthy cause like the band program at UWG, as well. We’re excited to reinvest back into the community into a program that will have a lasting benefit.”