When it comes to the University and its Wolves, the generosity of the Stone family knows no limits. Once again, Friends of the University Bob and Tish Stone, along with their family and SMI Company, have donated a second bronze wolf statue that has been placed in the end zone at University Stadium. 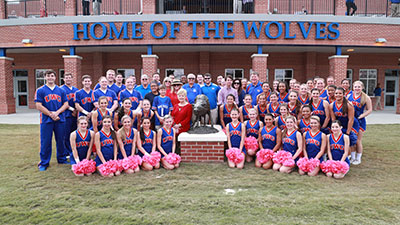 The Stone family gathered on Saturday, Oct. 15, along with UWG administrators, guests and cheerleaders, to dedicate the Fighting Wolf, prior to a home football game.

“I want to thank those responsible for giving the Stone family and our team at SMI the opportunity to share in the placement of two iconic symbols on the campus,” Stone said. “The first wolf statue at Wolf Plaza represents the powerful spirit of UWG students to achieve their dreams, hence the Spirit Wolf. The Wolf we dedicate today is the Fighting Wolf, placed here to remind student athletes as they take the field that they will need the strength, cunning and endurance of the Wolf to achieve the ultimate goal of success on the field of play.”

At the start of this year’s football season, Head Football Coach Will Hall started the tradition of the players passing by and touching the Wolf as they approach the field for a game.

“Our players love the statue,” Hall said. “College football is all about pageantry and traditions. Our players touch it before every game, it’s rumored there is magic in that Wolf! I can’t confirm it, but the Wolves always play great at home.”

Athletic Director Daryl Dickey spoke of the early building days of University Stadium when it was still just a hole in the ground.

“It was a dream of ours to have a monument of some kind for the team to gather around and be inspired,” he said. “We’re so appreciative of the Stone family and SMI for helping the Wolves to realize that dream.”

In the fall of 2014, the Stone family generously donated the Spirit Wolf statue that stands at Wolf Plaza overlooking the stadium. As Friends of the University, Bob and Tish Stone are staunch supporters of the university. Students on and off the field have benefited from their generosity.