Michael Browning knows the impact that education can have on your success. That is why he chose the education profession. 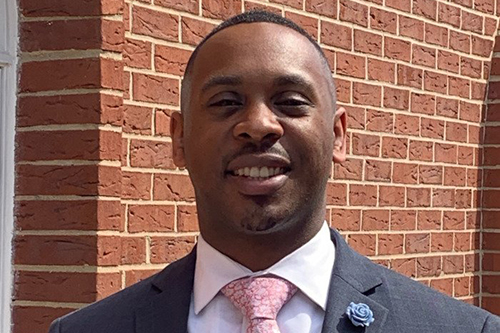 “I want people to know that teaching is not an easy profession, but it is absolutely the most rewarding – especially when you have a passion for learning and a passion for kids that run parallel,” said Browning, a 2013 University of West Georgia graduate.

The UWG Alumni Association recently recognized Browning as one of UWG’s Thriving Under 30 recipients. The program acknowledges alumni under the age of 30 who have made a significant impact in their chosen career fields. It also recognizes the honorees for their dedication and representation of the university.

After graduating from UWG’s College of Education with a bachelor’s of science in middle grades education, Browning began teaching at Bowdon Middle School.

By 2016, Browning had obtained his master’s degree of accomplished teaching in curriculum and instruction from Columbus State University. He then accepted a position at Austin Road Middle School in Henry County where he served as the chair of the social studies department.

While at Austin Road, Browning began the implementation of the Positive Behavioral Interventions and Supports (PBIS) system. He explained that the goal of PBIS is to encourage positive performance among students by acknowledging their good behavior.

During this time, Browning also coordinated the Multi-Tier System of Support (MTSS), which he said works hand-in-hand with PBIS.

“In that role I helped teachers work with students who are not necessarily performing at the level we want them too,” Browning said.

In 2018, Browning became the instructional and personalized learning lead teacher, where he worked to make classrooms more student-centered.

“I observed teachers and provided them with feedback on the way they instruct their students and how the kids perceive the learning,” he described. “From there, I would help them create more engaging lessons or create pathways for them so the students could be more self-directed and take a little more ownership in what they learn.”

Browning’s work in Henry County was recognized in 2018 when he was awarded Teacher of the Year.

“It was really exciting and validating to receive that award,” Browning said. “The teachers actually selected me, so it was a really good feeling.”

In 2019, Browning moved back to Carroll County and was promoted to assistant principal at Temple High School, where he currently serves today. He continues to create a positive learning environment for his students by using PBIS to increase social-emotional wellness in high school settings.

“When we see that students are doing the right thing, we acknowledge them,” Browning said. “But I also want to know how we can reward them in a way that meets their needs. We’re currently in a phase where we’re communicating with them to figure out a solution.”

Browning serves his community as well by mentoring young adults in his church. He recently obtained a $20,000 grant to create ministry opportunities that reach millennials.

Browning is currently completing a tier one leadership add-on that is supplementary to his master’s degree from Columbus State University, after which he plans to begin studying toward a specialist degree in educational leadership.

Browning expressed that the education he received at UWG was vital to his success.

“I think UWG prepared me well,” Browning said. “I absolutely enjoyed the instruction, I enjoyed the conversation and I enjoyed the placements that I was given while I was at West Georgia. In my opinion, the College of Education is second to none. It’s showing now.”

Browning expressed that being acknowledged as one of UWG’s Thriving Under 30 recipients inspired him to keep moving forward.

“Since I’ve received that award, I kicked it into gear a little bit higher,” he concluded. “I believe that we work from milestone to milestone, and that was yet another milestone. So I was excited and honored to be nominated, and at the same time I was also empowered to work even harder.”