Lance Paige Toland was a teenager when he first fell in love with flying. He scrubbed airplanes for $1.25 an hour at the airport in his hometown of Griffin, Georgia and saved his money for $25 an hour flight lessons. By the time he was 17, he had already soloed and was soon working as a mechanic apprentice overhauling Douglas DC-3 aircraft. 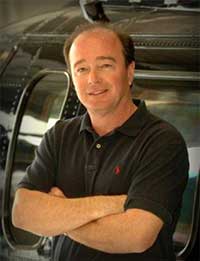 When the time came to start college, Lance didn’t think he could afford tuition; however, his employer transferred him to Carrollton and encouraged him to enroll at the University of West Georgia, then West Georgia College.

“My boss at the time—Wayne Craft, a Winder, Georgia native—said, ‘I have this company I am buying in Carrollton. You need to get in school over there,’” recalled Lance. “He said, ‘Go over and find out how much it’s going to cost to get in school there, and let me know.’ Which I did. I think it was $225 a quarter, plus living costs. He took three crisp $100 bills out of his pocket and said, ‘Go over there, get in school, here’s $300. I’ll take it out of your salary, but I need you over there this weekend because you’re my best guy.’”

In order to make school and full-time work happen, Lance slept in a hangar with no heat or air, flying back and forth on the weekends. Although it was difficult balancing school and work responsibilities, Lance explained that it awakened his determination and tenacity. Worried about doing poorly on exams, Lance recalled a professor encouraging him and his roommate, Randy Poynter, to persevere.

“We were sitting there at a local restaurant, Daniel’s, eating our first real meal in weeks, and this teacher came up to our table and said, ‘Gentlemen, how did you do on your finals?’ And I said, ‘I don’t think I did too well.’ And he said, ‘Well, Mr. Toland, I’m not worried about either one of you guys. You’re going to make it. Just keep at it, and keep at it, and keep at it. I just lost my bid for U.S. Congress, I’ll keep after it, and I want you guys to keep after it too.’”

That professor was Newt Gingrich, who later became the speaker of the U.S. House of Representatives. Randy Poynter later headed the Atlanta Commission and ran for lieutenant governor of Georgia back in the ‘90s before his untimely death.

Lance’s tenacity was not limited to schoolwork; he also found creative ways to use his piloting skills during the 1970s.

“I’ll let the cat out of the bag; I’m the guy who was the pilot who dropped out the sky streakers in 1974-1975,” he said. “These guys skydived naked right into the campus during an impromptu student parade one Wednesday night. The event made the Today Show the next morning.”

Lance laughingly shared that Dr. Pafford, former president of WGC, called him to his office and encouraged him to not repeat the stunt.

Lance continued working on as a night freight pilot (Beech 18 and DC-3) while pursuing a law degree from Woodrow Wilson College of Law in Atlanta. It was at this time he was tasked with an additional duty by his same employer, R.D. McSwiggan, president of Academy Airlines, to find out why he was paying so much for his company's aircraft fleet insurance.

“At first I pushed back and said, ‘I know nothing about aircraft insurance.’ McSwiggan never took no for an answer and said ‘Learn!’ At the time, I never realized Atlanta was the center of the universe for aviation insurance underwriting—right time, right place.”

Lance managed to turn McSwiggan's $250,000 high priced London based insurance renewal into a $170,000 insurance bill written locally and without comprising coverage. A new career was born.

Now in its 40th year, Lance Toland Associates is a recognized leader in aviation insurance management with a worldwide client base that includes actor John Travolta and Fortune 500 companies, as well handling the largest corporate managed fleet in Moscow operating Gulfstream Jets and Airbus Corporate aircraft. They just put a deal together for flight to Antarctica.

He’s logged a lot of flying time since those early days in Griffin and Carrolton airports , and now with more than 17,000 hours as a pilot in command of both airplanes and helicopters, Lance also holds the highest pilot rating possible: the airline transport rating – the FAA’s “Ph.D. of Aviation.”

Lance is a regular guest speaker at many aviation-related events and a participant in industry expert panel discussions. He has also been featured on CNN, providing insight for aviation news events. Lance serves on the U.S. Air Force Museum of Aviation Foundation board and is chairman of the Georgia Aviation Hall of Fame. Former Georgia Governor Sonny Perdue even appointed Lance to his Aviation Task Force, which investigated state aviation resources regarding risk management, safety practices, and overall efficiency. The undertaking resulted in a total revamp of the state's aviation assets, saving Georgia taxpayers millions of dollars and the implementation of many critical safety initiatives.

“I have had people come up to me routinely after events and say, ‘You know Lance, you don’t remember me, but you told me this or that, or I rode on an airplane with you, and you encouraged me.’ And you become somewhat of a missionary. That’s my missionary work,” Lance said. “You see people who have the desire, and there are a lot of hurdles, but what you do is straighten the road out and take a few bumps out for them. And if they heed the advice, they achieve that goal. If it’s given to you, then you probably won’t do a good job, but if you work at it, and give it all you’ve got, then you will continue to do a good job. Just pausing and giving a little to others is all it takes to get a lot and influence many.”

Lance is a published author, sharing his expertise in publications, such as “Business and Commercial Aviation,” “Forbes,” and “Dassault Falcon Jet Owners Newsletter.” His regular aviation insurance column, “Ask Lance Toland,” appears in the “Pilatus Owners and Pilots Association” quarterly newsletter. He is also proud of his work for Georgia and Stepping Stones schools for challenged, at-risk children and as a benefactor of St. George’s Episcopal School. Most recently, he received a U.S. patent for a pneumatically operated flight simulation device, a project he’s been working on for five years.

Lance and his wife, Jan Brown, met at West Georgia College on blind date in an airplane hangar and have been married for 32 years. They have two children: Ansley Ruth and Lance Jr. both who also fly.

The Tolands are members of the United Methodist Church and divide their time between their home on Sea Island, Georgia, and their family farm in Milner, Georgia.