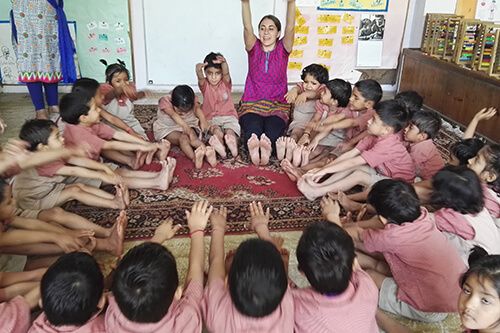 But University of West Georgia alumna Andrea Laubstein wonders how much they learn about themselves?

“You spend all these years studying the world outside and everything going on around you,” Laubstein observed, “but was there any subject that asked you to turn inwards to learn about yourself – your own emotions, your own mind – and the way you are and who you are?”

Laubstein, a native of New Milford, Connecticut and 2018 graduate of the UWG College of Social Sciences’ Master of Arts in Psychology program, has been practicing yoga since she was 12 and teaching it since she was 19.

Even as a child, Laubstein always felt a passion for working with children through various mediums. After intensive yoga study, she discovered its benefits not only affected adults but children as well.

“There are so many techniques and practices for not just stretching the body but also for reestablishing the mind,” she said. “We become better prepared for handling the ups and downs of life and individually evolve into a more balanced person.”

Laubstein said there are several yoga techniques that are helpful for children in the classroom. If students have spent hours at desks, simple poses such as back bending or stretching their arms over their heads could combat the stiffness that plagues the body after sitting for too long. Breathing exercises, such as inhaling for four counts and exhaling for four counts, along with guided visualizations led by the teacher can help clear and relax the mind. 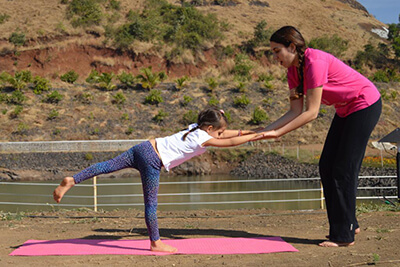 Sometimes there is so much tension in the body, for example the shoulders and throat, and they’re holding it all day long,” she described. “When they let that go, there’s so much space in the body and the energy can move more freely. Circulation can increase to the brain allowing more clarity.”

The philosophy of yoga can also present itself in the classroom, she explained. Most importantly, what it means to be nonviolent, compassionate and content.

“It creates a whole different energy that is really important for children to experience,” Laubstein continued. “School is not this competitive stressful place where the aim is all about achieving really high grades or passing exams. The atmosphere in the classroom becomes one in which they are there to develop and understand themselves and to understand what their interests and strengths are.”

Currently in India developing her understanding of yoga and alternative education, Laubstein recently spent time at Shibumi, a J. Krishnamurti school in Bangor, India, that emphasizes self-inquiry, awareness, and personal and holistic development of the child. 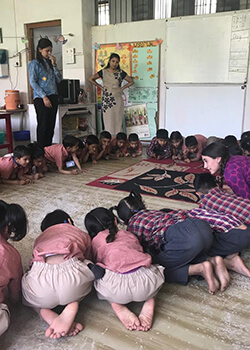 Having already trained teachers in Italy and India, Laubstein will travel to Singapore in June before bringing her teachings to Carrollton – her first in the U.S. – in July.

She was first introduced to Carrollton after graduating from Bucknell University in Pennsylvania while looking for a master’s program that matched her personal and professional goals.

“There was no program that fit my interests like UWG’s psychology department did,” Laubstein said in reference to UWG’s humanistic approach to psychology. “They’re looking for a holistic development for being in the world. Bringing yoga to children is about developing the whole person from the very beginning.”

The greatest gift UWG and her master’s degree gave her, however, went beyond content and information.

“Faculty really give you a lot of space to explore your curiosities and interests, and they support you in researching them,” Laubstein concluded. “It gave me an enhanced development of myself and understanding of who I am and what I have to offer the world.”