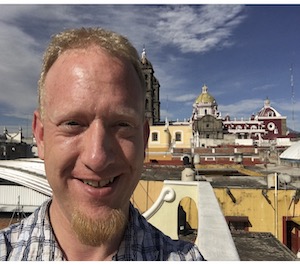 Prof. Sterling grew up in St. Paul, MN and attended the University of Wisconsin-Madison, where he earned a double B.S. in physics-astronomy and mathematics. He received a Ph. D. in astronomy from the University of Texas at Austin, and has had postdoctoral fellowships at the NASA Goddard Space Flight Center and Michigan State University. He taught physics at Valparaiso University (Indiana) before joining the University of West Georgia in August 2013.

Prof. Sterling studies planetary nebulae, the gaseous ejecta of dying low-mass stars (1-8 times the Sun’s mass). He uses spectroscopy to study the chemical composition of planetary nebulae, in order to understand how elements are formed in low-mass stars. From observations with 3−10 meter telescopes in the US, Chile, and Spain, he has discovered and analyzed emission lines from some of the rarest elements in the Universe, including selenium, krypton, rubidium, cadmium, tellurium and xenon. In addition to his observational research, Prof. Sterling studies the atomic properties of heavy element ions via state-of-the-art computer calculations and (previously) experimental measurements conducted at the Lawrence Berkeley National Laboratory.

His research is currently funded by an NSF grant to investigate how atomic ions capture electrons (a process called recombination) in astrophysical plasmas, and a NASA Georgia Space Grant Consortium award to promote diversity and inclusion in physics and astronomy through undergraduate research opportunities.  On the observational side, Prof. Sterling has recently been awarded time on the 8.1-meter Gemini South and 8.2-meter Very Large Telescopes in Chile to study planetary nebulae in the Milky Way and nearby galaxies.

Dr. Sterling encourages students interested in astronomy or atomic physics research to contact him. He is proud to supervise several undergraduate research students each year, most of whom present research results at state and/or national conferences.