When asked whether she would go back and change the moment when she got on a zip line that resulted in a life changing accident, Aimee Copeland is quick to answer.

“Knowing the impact that I have and will continue to have, and knowing how this experience has shaped my life for the better,” she said, “a million and one times, I would go on that zip line again.”

Copeland was a graduate student at the University of West Georgia in 2012 when she fell from a homemade zip line and contracted necrotizing fasciitis, a deadly disease that claimed both arms below the elbow, her right leg below the knee and her left leg almost to her hip. She recently returned West to share her nothing-short-of-miraculous story of survival and perseverance with faculty and staff, some who were with her during those touch-and-go moments . . . as well as some lessons she’s learned along the way.

Lesson One: Suffering is Relative

“Compassion, going out and helping people, actually leads to healing in ourselves. It’s really hard to feel sorry for yourself when you recognize the struggles people are facing all the time.”

Copeland said she witnessed this virtue firsthand at the Shepherd Center in Atlanta. Part of her decision to seek treatment there was based on its focus on spinal cord injuries as opposed to limb loss.

“If I’d been at an amputee rehabilitation clinic, it might’ve been easy for me to feel sorry for myself, surrounded by people only missing one limb,” she reflected. “At the Shepherd Center, my neighbors on either side couldn’t move any parts of their bodies, except their heads.”

Copeland said the experience put everything in perspective for her and showed her that suffering is relative. She understands that it’s easy to get bogged down with the pettiness of day-to-day issues, like traffic. But she contends that by helping other people, you help yourself. She said she learned this lesson while working at Friends of Disabled Adults and Children (FODAC) and watching a four-year-old girl walk for the first time thanks to a refurbished walker she needed.

“To see the light in her eyes as she ran across the room, being vertical for the first time, touched my heart,” she shared. “It gave me a passion to advocate for other people and to make the world a better place for them. It’s to be that spark to them, to show these kids what I’m doing and what they can be when they grow up.”

“We have these incredible brains—this human ingenuity—that no matter what situation we’re placed in, if we want badly enough to succeed, we can.”

If there were ever an embodiment of perseverance, Copeland would be it. Unlike the Shepherd Center, there is no call button at her house. If she wants something, she has to figure out a way to get it. And as a newly disabled individual, she confided that at first she was hurt when people told her there were certain things she couldn’t do.

“I kind of like it when people say I can’t do something,” she said, “because then I say, ‘I’m going to prove you wrong.’”

For example, when Copeland was getting fitted for prosthetics and expressed her excitement at walking again, the doctor pulled her boyfriend aside and bluntly explained she would never walk without two forearm crutches. Today, she wears her left leg prosthesis for 30 minutes a day as she walks on the treadmill . . . unaided.

Whether it’s putting her hair in a ponytail or whitewater kayaking down the Ocoee River, Copeland said she doesn’t put limits on herself. 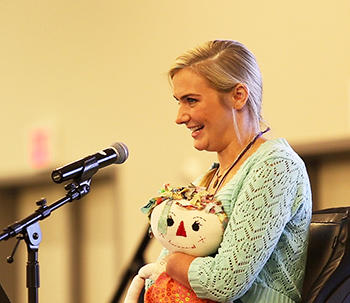 “Beauty is something that shines from your inner being—not your exterior.”

Waking up with a third of her body missing resulted in Copeland questioning her own identity. She said a nurse named Jacqueline realized this could be an issue so the two of them would spend time talking in the ICU about what it meant to be beautiful. Copeland remarked that today she feels exactly the same as she did before, and that nothing about her has changed except her body.

“She helped me realize that this body is just my vehicle here on earth,” Copeland declared. “I am much greater than what you can see. I am a spiritual being encapsulated for the time being. Who I am extends far beyond this flesh you see here.”

As a reminder, Copeland brought with her a ragdoll she calls Jackie, named after the nurse who hand stitched it for her. On the back of the doll is a personal message conveying that everyone is made differently and nobody is perfect.

“I definitely didn’t expect that this is where I’d be at 28 years old. Life doesn’t always work out how we plan, but I think it works out as it should.”

While studying ecopsychology at UWG before her injury, Copeland said she had plans to help troubled teens or addicts find their self-growth by taking walks in the woods. When she woke up in a hospital bed with no feet, she thought maybe those hikes wouldn’t happen anymore. The more she lay there, the more she came to realize that the disabled population was the group most severed from the environment and needed it the most.

Having recently graduated with a master’s degree in social work, Copeland said her goal is to help people with disabilities access nature by creating a community growth center that is accessible to those of all ages and abilities. She would also like to offer holistic modalities to help people with their personal growth, including individual and group counseling.

“If you want to be the best individual you can be, then you need to work on yourself, and therapy and counseling are ways of working on yourself,” she said. “Just like how we exercise our bodies, we also need to exercise our minds.”

Another important part of the center would be bringing awareness not to what separates people but rather what brings them together.

“I lived a perfectly normal life until I was 24 years old. I never thought about the kids who were sitting on the sidelines at recess,” Copeland explained. “I think one thing that would be very important about this center is the aspect of inclusion and bringing people together in the community. Anybody can come and enjoy the services and meet people with disabilities and see that we have more similarities than we have differences.”