As a child, University of West Georgia alumnus Michael Goodroe was developmentally behind other children his age. Now, at 31 years old, he is a public speaker and author.

An Unexpected Story of Hope and Perseverance

In his early years, he was unable to answer simple questions, had poor motor skills and did not interact with other children. When experts tested him, their responses indicated low-functioning autism and a hopeless future.

At the time of his diagnosis, autism was rare. There was very little information and no hope for positive change in the future. However, Michael’s mother, Joane Goodroe, found an abundance of inner strength where most would not.

“Every time Michael was tested by experts, their reports and comments portrayed a hopeless situation,” Joane said. “It was a kick in the stomach that stayed with you – a feeling of worry and sadness. But the feeling would diminish when I was with Michael. I always saw a spark in him that encouraged me.”

While Joane and Michael’s dad were optimistic, they were not in denial about Michael’s obvious challenges.

“I would say, ‘Michael has the correct diagnosis, but the prognosis is wrong,’” Joane recalled.

As a child, Michael watched shows like “Teenage Mutant Ninja Turtle” and “Power Rangers” and even became Bruce Lee’s number one fan. He wanted to be just like them but had no idea he had challenges that would make that dream difficult.

The Goodroe family came across a martial arts program, U.S. Taido Karate, and Michael found himself in a place where he felt like he belonged. 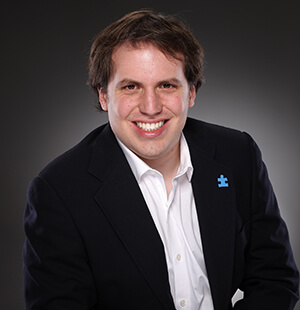 Michael’s mother described his karate experience as one of the main influencers in his growth.

“It would have been easy for the owner and grandmaster, Mitsunobo Uchida, not to accept Michael into his program,” Joane explained. “His challenges were significant, which meant he would create extra work for them.”

Michael’s ability to complete the simplest task seemed formidable, but over time there were small improvements. Perhaps more importantly, he also had a place where he belonged, a group of which he was a part.

“This is such a heartbreaking aspect of autism – there are few options in which you can be a part of a bigger group,” Joane continued. “But due in part to Michael feeling a sense of belonging, his motor skills, brain connectivity and social skills improved tremendously. Twenty-five years later, he was awarded his third-degree black belt.”

In addition to his love for karate and its associated achievement, Michael found solace in music. He sang along to the radio, listened to music on television and loved to imitate many of the songs he heard. It brought him joy and comfort, and to his surprise, he was extremely talented.

“I found listening to music to be very peaceful and calming,” Michael shared. “It also gave me a positive feeling that is hard to describe. I had no idea that I could sing any better than others. Yet in high school, my singing allowed me to take on lead parts in musicals. It was the one area where I stood out in a positive way. I had no idea that singing would later be my ticket to college.”

Michael first discovered his diagnosis when he was a senior in high school. He described his reaction as confused but used it as a chance to understand himself.

“It was confusing because I truly did not understand my challenges or exactly what autism was,” Michael described. “I never understood that I had significant challenges. Until I wrote my book, I had never looked at my testing results. I was stunned and sad when I saw the extent of my problems.”

“During my college searches, I thought I needed to find a college that specialized in students who had learning disabilities,” said Michael, who earned his bachelor’s degree in history at UWG. “Then, I saw that UWG had sent my school a flier about singing auditions. I told my parents I wanted to try it. I had auditioned at three universities, but I felt an immediate connection to UWG. I knew it was where I belonged.”

Like every step in his life, the admission process was not simple. His SAT scores were too low for acceptance, but Dr. Kevin Hibbard, chair and professor of music and director of choirs, decided to intervene.

“My voice colleague and I thought that Michael would make a significant impact on the choral program at West Georgia due to his strong voice and tone quality,” Hibbard said. “When I was informed that Michael did not meet the criteria for admission, I worked with Dr. Bobby Johnson, then director of admissions, to request a presidential exception. I wrote the appropriate letter and was pleased to learn that an exception was granted.”

As thrilled for Michael as she was, Joane and her husband were also concerned. Michael’s doctors originally stated that he would never live independently or be able to handle and educational challenges, especially college.

His previous educational background was non-traditional, and as a nurturing mother, Joane questioned how he would adjust. Michael had beaten the odds thus far, and again his mother had faith in him.

Not only did Michael complete his education, express his passion for singing through performing with the music department, and grow his life skills immensely, he learned more about his diagnosis. 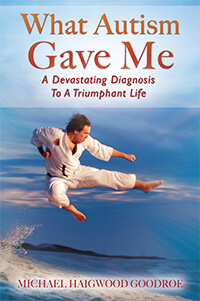 “In my second semester at UWG, I chose the subject of autism for my project topic in a speech class,” Michael stated. “It helped me learn more about my diagnosis. I did not see some of the traits in me. For example, people with autism are known to have poor social skills. That was not how I saw myself. I enjoyed being around other people but learned I didn’t see social cues.”

Through his experiences, Michael’s family has watched him turn his prognosis completely upside down. He has accomplished much more than anyone ever thought possible.

Michael’s family and other supporters suggested he write a book. Michael took this idea and ran with it. His map of experiences has now become a tale of achievement titled, “What Autism Gave Me.”

“I want all people, not just those with autism, to know that anyone with autism has as much potential as anyone else,” Michael concluded. “It is so important not to define someone by what they cannot do. When I was writing my book, I hoped sharing my story of a ‘hopeless case’ with a positive outcome would inspire others with autism. Now, I realize that there is a bigger message. Whatever the challenge someone faces in life, never give up.”