University of West Georgia alumna Brandy Barker recently launched Air Air, an innovative art residency program in which artists are challenged to create art in the unusual circumstance of being on an airplane. The first session of Air Air took place March 16-17 of this year. 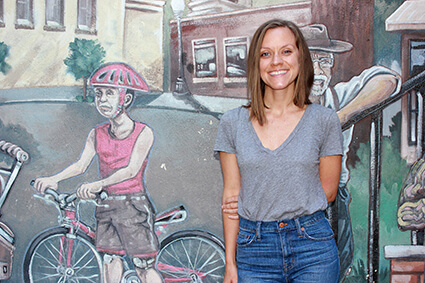 “Air Air is an artist residency opportunity for artists to make art on airplanes, very simply,” explained Barker, who graduated from UWG in 2008. “Artists go on commercial airlines and take whatever materials they can put in their carry-on bags and get through security, and they create artwork in their seat.

“Once they land, they have about 12 hours of time on the ground to do any finishing,” she continued. “Then they hand the artwork off to me, and I go and install a pop-up exhibition that lasts about two hours. The entire project wraps in about 48 hours.”

Barker’s frequent traveling for her work in graphic design and branding inspired the unique project. As she sat in airports and on planes for 15 or more hours each month, Barker wondered if there was something productive she could be doing with this time. She began to utilize her travel time to pursue artistic outlets like writing, and soon after, she had the idea to create Air Air.

“I started really thinking about taking advantage of all that time I had to create, and I thought, ‘I wonder how people would respond to the same opportunity if they were given the chance to get on an airplane in this constrained space and told to make something,’” said Barker. “I don’t care what it is: music, visual art, write a play! I don’t care, just create something.”

Barker’s idea, which was conceived in September, was finalized quickly, and the project was announced in December. Within 19 days, the Air Air website and social media accounts were created, and three artists had signed up and committed to participating in the project. A short three months later, the artists were in the air to kick off the program.

Air Air has two major concepts at its focus: artists working under unusual constraints, like time and spacing, and placing art in unexpected places, such as airplanes and airports. Throughout the course of the flights on March 16, Barker’s participating artists documented their journeys on social media to keep followers updated. The exhibition then took place at MOTHER, a bar in Atlanta, on the evening of March 17, which coincided with the Southern Graphics Council International conference in Atlanta. 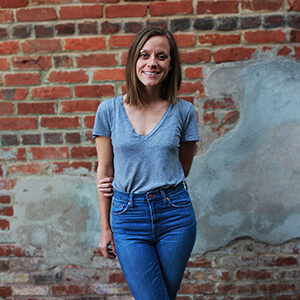 “The exhibition itself, I felt was great,” said Barker. “There was a great turn out; we even had to kick people out. It was fun. I think people responded to the environment. There was music playing, people were drinking and having food, and it was just a good time. Everybody was hanging out and enjoying themselves, and the artwork was awesome. I was really happy with the exhibition.”

While the March event was Air Air’s debut, Barker has been invested in the art world since her undergraduate career at UWG. Looking back at her time as a student, Barker recognizes her professors as one of her biggest motivations.

“I definitely had great support and encouragement from my professors, especially my art professors,” said Barker. “I watched them continue their practice and them continue their work and side projects and community related projects, and that was inspiring and motivating, that you can have a 9-5 and you can still work on these things and provide opportunities for artists and yourself.”

Barker plans to continue to provide these opportunities through expanding Air Air. The next session of the program will take place in September of 2017, creating a bi-annual series for the event. She already has a waiting list of artists requesting to be a part of this creative event.

“As a long term goal, I think it would be super cool to always know that every day, someone is doing something,” said Barker about the future of Air Air. “I have, I don’t know, six other residency ideas that are all based around temporary spaces, impermanence and traveling. I’m excited to kind of create an umbrella project or company that houses all of these art residency opportunities and start to develop those so that there’s always one going on.”